UBC and BC Cancer scientists have uncovered some of the tricks used by the deadliest ovarian cancer to escape the immune system, setting the stage for a better understanding of how and why patients respond to promising new immunotherapies.

The study, published May 10 in Cell, used advanced molecular measurements and computer algorithms to analyze how immune cells infiltrate tumours. They “zoomed in” to get a better look at the spaces between the immune and cancer cells to see the proteins present on their surfaces, and sequenced DNA to understand genetic changes that took place within cancer cells after interacting with immune cells. 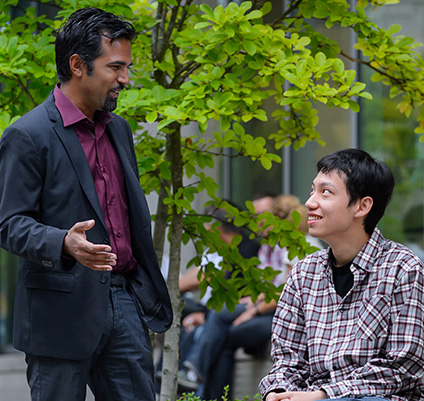 “Our findings reveal an evolutionary arms race between immune cells and HGSC cells,” said lead author Allen Zhang, a UBC MD/PhD student. “As the immune system mounts an attack on a tumour, some cancer cells are eliminated while others evolve and change to resist attack from immune cells. This may help us understand why HGSC often responds poorly to current immunotherapies.”

[Zhang is one of the youngest ever students accepted into UBC’s MD program, entering in 2013 at the age of 18. Upon entering the especially demanding MD/PhD program a year later, he became the youngest student ever admitted to that stream, which typically lasts seven years.]

UBC and BC Cancer scientists plan to use these latest insights to develop more powerful immunotherapies for gynecological cancers. One such therapy involves extracting the patient’s own T-cells, conditioning or engineering them to recognize and kill cancer cells and infusing large numbers of those programmed cells back into the patient’s body.

“Our findings reveal fundamentally new insights into the cause and consequences of ovarian cancer and immune cell interaction,” said senior author Sohrab Shah, an Associate Professor in the Department of Pathology and Laboratory Medicine and Senior Scientist at BC Cancer. “The results provide a new lens through which we can interpret a host of recently launched ovarian cancer immunotherapy clinical trials around the world.”

Inspired by success in treating other cancers especially in most types of advanced leukemia, BC Cancer’s Immunotherapy Team, led by Brad Nelson and Rob Holt, is ready to launch the first of a series of clinical trials for ovarian and other gynecological cancers.

“We’ve known for several years that many ovarian cancer patients launch a strong immune response against their tumours, yet this response often fails to control tumour growth over the long-term,” said Dr. Nelson, a Professor of Medical Genetics, a Distinguished Scientist at BC Cancer, and a co-senior author of the study. “This study has revealed the different tricks used by HGSC tumours to escape from the immune system, leading to exciting new ideas for engineering more potent immune responses that can overcome these various escape mechanisms.”