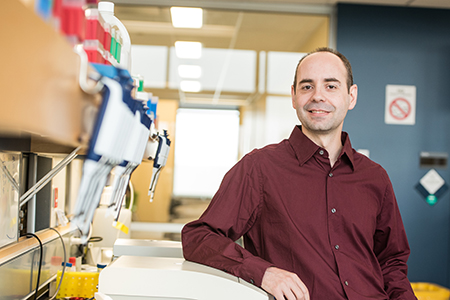 Less than a year after publishing research identifying a single genetic mutation that caused multiple sclerosis (MS) in two Canadian families, scientists at the University of British Columbia have found a combination of two other mutations in another family that made them highly susceptible to the disease.

The “double gene” mutation was identified in a large Canadian family with five members diagnosed with MS – all of whom had the DNA abnormality. Two other family members had the same mutation but didn’t develop MS, indicating that some other genetic or environmental conditions are still necessary to trigger the disease process.

The discovery of this mutation, on top of last year’s findings, should help erase doubts that at least some forms of MS are inherited. The prevailing view has been that a combination of many genetic variations causes a slight increase in susceptibility. In this family, individuals with the double gene mutation have about a 7-in-10 chance of developing MS, compared to a 1-in-1,000 risk in the general population.

These mutations, described in the journal Human Mutation, impair both immune function and phagocytosis, the process by which cells eliminate debris and pathogens.

“This is the first time that problems with phagocytosis have been linked to MS, and provides scientists with a better understanding the disease’s origins and targets for developing new treatments,” said lead author Carles Vilarino-Guell, an Assistant Professor of Medical Genetics who collaborated with colleagues at Australia’s Florey Institute of Neuroscience and Mental Health.

The findings also could be used to screen people with a family history of the disease; an individual who was found to have this mutation could be a candidate for early diagnostic imaging long before symptoms appear, or could opt to reduce environmental risks by taking Vitamin D supplements or quitting smoking.

MS results from the body’s immune system attacking myelin, the fatty material that insulates neurons and enables rapid transmission of electrical signals. When myelin is damaged, communication between the brain and other parts of the body is disrupted, leading to vision problems, muscle weakness, difficulty with balance and coordination, and cognitive impairments. Canada has one of the highest rate of MS in the world, for reasons that elude scientists.

The double mutation, unlike the single mutation described last year, leads to the more typical “relapsing-remitting” form of MS, in which the symptoms come and go. These differences in clinical symptoms suggests that different biological processes are responsible for each type of MS, which could explain why treatments for relapsing-remitting patients are ineffective for people with more debilitating, progressive form of the disease.

The family with this mutation had donated to a Canadian-wide collection of blood samples from people with MS, begun in 1993 by co-author A. Dessa Sadovnick, a UBC Professor of Medical Genetics and Neurology. The 20-year project, funded by the MS Society of Canada and the Multiple Sclerosis Scientific Research Foundation, has samples from 4,400 people with MS, plus 8,600 blood relatives – one of the largest such biobanks in the world, stored at UBC and Vancouver Coastal Health’s Djavad Mowafaghian Centre for Brain Health.