An image illustrating how the Cas 9 protein rearranges itself (indicated by the arrow) to enable the “scissoring” action for cutting DNA.

For the first time, scientists have captured high-resolution, three-dimensional images of an enzyme in the process of precisely cutting DNA strands.

The images—captured using a technique called cryogenic electron microscopy, or cryo-EM—reveal new information about how a gene-editing tool called CRISPR-Cas9 works, which may help researchers develop versions of it that operate more efficiently and precisely to alter targeted genes.

The findings—published today in Nature Structural and Molecular Biology—hold promise for future treatment and prevention of a range of human diseases caused by DNA mutations, from cancer to cystic fibrosis and Huntington disease. 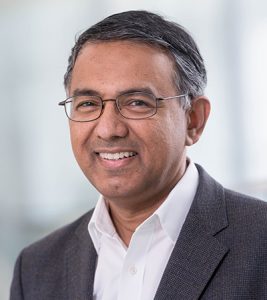 “It is exciting to be able to see at such a high level of detail how Cas9 actually works to cut and edit DNA strands,” said UBC researcher Sriram Subramaniam, who led the cryo-EM studies. “These images provide us with invaluable information to improve the efficiency of the gene-editing process so that we can hopefully correct disease-causing DNA mutations more quickly and precisely in the future.”

CRISPR-Cas9 is a gene-editing tool in which the enzyme Cas9 acts like a pair of molecular scissors, capable of cutting strands of DNA. Once the enzyme makes cuts in DNA at specific sites, insertions and edits can be made, therefore changing the DNA sequence.

To better understand the sequence of events involved in the process, Subramaniam and colleagues used cryo-EM technology to image the Cas9 enzyme at work. The images provide unprecedented glimpses of the stepwise molecular motions that occur in the course of DNA cutting by Cas9, including a snapshot of the cut DNA still attached to the enzyme immediately before release.

“One of the main hurdles preventing the development of better gene-editing tools using Cas9 is that we didn’t have any images of it actually cutting DNA,” said the study’s co-senior author, University of Illinois researcher Miljan Simonovic. “But now we have a much clearer picture, and we even see how the major domains of the enzyme move during reaction and this may be an important target for modification.”

These images provide us with invaluable information… so that we can hopefully correct disease-causing DNA mutations more quickly and precisely in the future.

The Subramaniam laboratory was the first to achieve atomic resolution imaging of proteins and protein-bound drug molecules using cryo-EM. In the last few years, they have pioneered the use of cryo-EM to visualize a variety of proteins including metabolic enzymes, brain receptors and DNA-protein complexes.

The study was supported by the funds from the US National Cancer Institute, National Institutes of Health grants, the UIC Center for Clinical and Translational Sciences, and by a Canada Excellence Research Chair position awarded to Subramaniam.

As the Canada Excellence Research Chair in Precision Cancer Drug Design, Subramaniam directs a laboratory aimed at bringing about transformative discoveries in cancer, neuroscience and infectious disease. Xing Zhu, the study’s first author, as well as co-author Sagar Chittori are members of the Subramaniam laboratory at UBC.