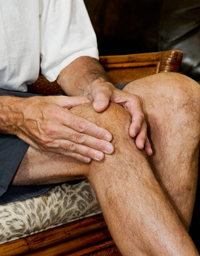 A UBC clinical assistant professor has made the first statistical link between two major types of drugs and nocturnal leg cramps – involuntary muscle contractions, often coming during sleep, that afflict 37 per cent to 50 per cent of older people.

Scott Garrison, in the Department of Family Practice, has shown that a person who took a common type of diuretic (commonly used to treat high blood pressure) or long-acting B2-agonists (LABAs, commonly used to treat asthma or chronic obstructive pulmonary disease) is twice as likely to develop nocturnal leg cramps as those not taking such drugs. His findings were published Jan. 23 in the Archives of Internal Medicine.

“Nocturnal leg cramps are no laughing matter – they are extremely painful and unsettling,” said Karim Khan, a Professor in the Department of Family Practice and member of the Centre for Hip Health and Mobility, who supervised the research.  “A few patients are afflicted almost nightly. Dr. Garrison has discovered a practical solution – modifying the patient’s prescription or reducing it, when most clinicians would have been looking to add additional medication. Taking many drugs, or polypharmacy, is a major health risk for older people.”