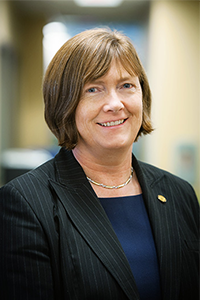 In recent years, British Columbia has witnessed a dramatic increase in the number of midwife-assisted births — jumping from 4924 in 2011 to 7360 in 2012-13. As the numbers climb, those with UBC’s Midwifery Program have stopped to ask themselves just one question: how can we help meet the growing demand for midwifery services across the province?

“With a number of family doctors, obstetricians and midwives set to retire in the coming years, there’s a need for more maternity care providers in B.C., particularly outside the Lower Mainland — midwives can help fill that need,” says Michelle Butler, who was recruited from University College Dublin to become the Director of UBC’s Midwifery Program last January.

In 2012, thanks to a boost in funding from the Province of British Columbia, UBC’s Midwifery Program expanded two-fold, doubling the number of student spaces from 10 to 20 per year.

But expansion is only one way in which the program is looking to address the service gap in maternity care. In recent months, Dr. Butler and her team of dedicated faculty and staff launched the Island Cohort — an initiative that will see up to eight UBC midwifery students move to Vancouver Island every year to be trained and ultimately complete their bachelor’s degree.

Rebecca Dickinson, a second-year UBC midwifery student, is one of eight students to join the first Island Cohort. In September 2014, she packed her bags and boarded the ferry to Victoria, where she’s now continuing her journey to becoming a midwife.

According to Dickinson, who was born and raised in Kamloops, the student experience on the Island has been nothing short of incredible.

“I really like being on the Island because there’s a strong sense of community. I run into fellow students and clinical faculty all time — you feel like your support network is nearby. There’s also a lot less traffic here,” Dickinson says with a smile.

And while Dickinson and the other Island Cohort students may be separated by distance from their peers in Vancouver, they remain closely connected with the help of technology.

In fact, students on the Island share a number of classes with their Vancouver counterparts, taking advantage of state-of-the-art videoconferencing technology, which has helped make UBC’s now decade-old distributed medical education program such a success.

And while technology has played a big part in keeping the Island Cohort students connected, they’re also developing close bonds with their new community. 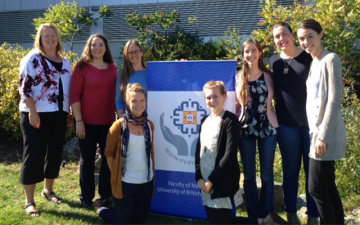 “There’s a strong sense of community on the Island,” says Melanie Mason, one of the Island Cohort students. “Our preceptors have been wonderful at introducing us to professional opportunities, but also inviting us to social events.”

Lorna McRae, a registered midwife on Vancouver Island, is among the team of faculty ‘on the ground’ in Victoria. Having been with the Midwifery Program since 2008, she’s thrilled to see the Island Cohort now up and running.

“It was so lovely to see the first wave of midwifery students come to the Island back in September,” she says. “We really want to equip our students to work in a variety of settings and regions of the province, and the launch of the Island Cohort is an important milestone.”

But McRae will be the first to acknowledge that the launch of the Island Cohort wouldn’t have been as smooth without the incredible support from nurses, doctors and midwives on the Island, as well as faculty and staff of UBC’s Island Medical Program — which was established in 2004 as part of the distribution of the Faculty of Medicine’s Undergraduate Medical Education Program.

“We’ve been able to take advantage of the wonderful facilities of the Island Medical Program and the faculty and staff have been so supportive,” says McRae.

Building on the model of province-wide education

The UBC Midwifery Island Cohort represents the next chapter in the Faculty of Medicine’s innovative approach to province-wide education — first adopted by the undergraduate and postgraduate medical programs. In 2012, UBC’s Physical Therapy Program was the first of the health professions programs to distribute, sending a group of students (the Northern and Rural Cohort) to Prince George to train.

For Dr. Butler, these programs have served as a wonderful model for the distribution of the Midwifery Program to the Island.

“Similar to UBC’s distributed medical education program, we thought it would be a great idea to distribute midwifery education,” says Dr. Butler. “By offering midwifery students an opportunity to experience living and working in communities beyond the Lower Mainland, they’ll not only be exposed to diverse health care settings, but may also begin to develop an interest in practicing in these areas once they qualify.”

Gaining experience in rural and remote regions of B.C. 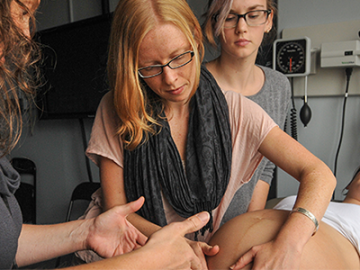 Before launching the Island Cohort, the UBC Midwifery Program had already taken steps to introduce students to midwifery practice across the province by incorporating a mandatory clinical placement in a rural or remote region of B.C.

McRae, as one of ten children growing up in an isolated community in eastern Ontario, is deeply aware of the need to equip maternity care providers with the skills to work in rural and remote regions.

“Rural areas continue to face a gap in maternity care service,” says McRae. “By training our students to become comfortable with some of the unique challenges of rural and remote maternity care, they’ll be better equipped to serve a variety of communities down the road.”

By January, Melanie Mason will be en route to Duncan, where she’ll complete her second clinical placement. Mason, who is originally from the community of Anola, nearly 30 kilometers east of Winnipeg, says she is looking forward to the prospect of training in a smaller community.

“I have a desire to work more rurally and, being Metis, I’d like to also work with Aboriginal communities, where there’s a real need for maternity care,” she says. “I think midwifery is a great way to connect back to community — it allows you to bring traditional and Western ways together, and it is a really empowering way to practice as a health care practitioner.”

Mason’s peer, Dickinson, is also keen to work outside of highly urban areas. After graduation, she hopes to either stay and practice on the Island, or go where she’s needed most.

“I’d like to practice rurally and serve a community that doesn’t have midwifery care yet,” Dickinson says. “I’m young, and because I’m not committed to any place, I see it as my responsibility to practice in a place where midwifery is not yet established.”

As the program director, Dr. Butler has high hopes for the Island Cohort. And though it’s still early days, she says there’s interest in exploring further distribution of the Midwifery Program to B.C’s Interior and North down the road — an initiative that will take some serious planning and collaboration, but one that may help to transform the landscape of maternity care across the province in the years to come.