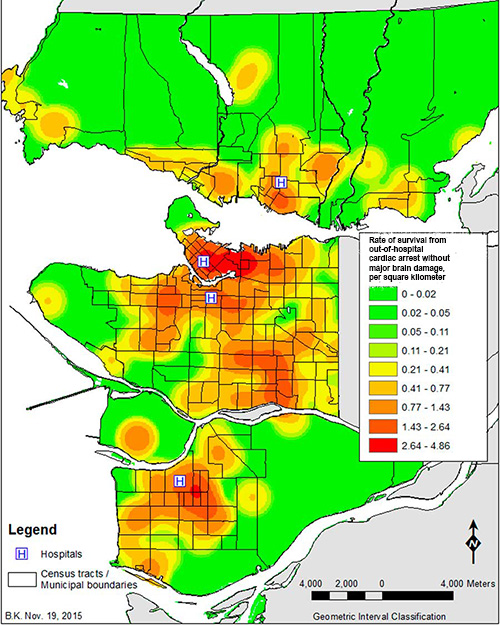 The chances of surviving a cardiac arrest outside of a hospital are pretty slim. In Vancouver, just 15 per cent survive.

But new UBC research of out-of-hospital cardiac arrests in metro Vancouver – the first-ever such study done in a Canadian city – shows that outcomes vary widely based on where the incidents take place.

Analyzing data from 1,600 cardiac arrests outside hospitals between 2007 and 2011, the researchers found that neighborhoods with higher proportions of ethnic Chinese residents had a higher frequency of bystanders performing cardiopulmonary resuscitation (CPR) – the first-ever such observation. Receiving early CPR makes a major difference in whether someone survives a cardiac arrest.

“We don’t have a clear explanation as to why bystander CPR is higher in predominantly Chinese areas, but it’s possible that the community is more receptive to doing CPR,” said lead author David Barbic, a Clinical Assistant Professor and emergency department physician at St. Paul’s Hospital who collaborated with UBC Geography Professor Brian Klinkenberg to produce the analysis, published last month in the Canadian Journal of Emergency Medicine.

Distance to a hospital also was a major factor in survival. People who had cardiac arrest within 2.7 kilometres of a hospital had higher survival rates, which contradicts previous studies done in U.S. cities. That helps explain why areas near Vancouver General Hospital, St. Paul’s Hospital and Richmond General Hospital had some of the best outcomes.

Dr. Barbic and colleagues found another contrast between metro Vancouver and U.S. cities that have been studied this way: The chances of emerging from a cardiac arrest don’t depend on whether the neighborhood is rich or poor. In fact, lower-income areas had higher rates of bystanders providing CPR.

Generally, Dr. Barbic says, the odds of surviving a cardiac arrest are much higher when it happens in a public area – such as a commercial district – because that increases the odds that someone nearby is able and willing to perform CPR. Public areas also are more likely to have access to an automated external defibrillator, a device that bystanders can use to shock a heart back into a normal rhythm.

The average age of people having cardiac arrests was 67 years old, with two-thirds of them men. Half of the people studied were transported to hospital; the others died at the scene.

A team of resuscitation researchers, including co-author and UBC Professor Jim Christenson, have been involved in studies and guideline recommendations to improve out-of-hospital response to cardiac arrest – for example, by promoting a change in bystander CPR that emphasizes chest compressions over mouth-to-mouth respiration.

“Over the last 10 years, the survival rate from cardiac arrest has more than doubled,” said Dr. Christenson, Head of the UBC Department of Emergency Medicine. “Data like this will help B.C. health planners in their efforts to raise the survival rate even higher, through placement of public access defibrillators, bystander training, and optimizing the instructions given by emergency dispatchers to people at the scene.”