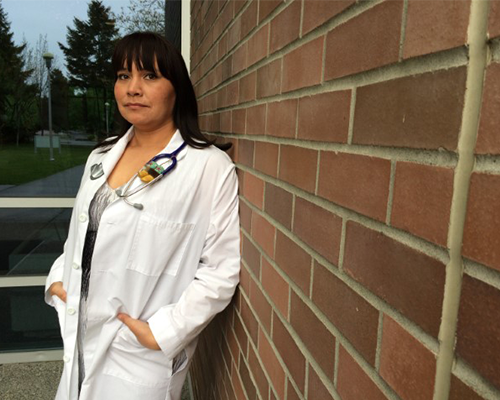 Long before the training wheels on her first bicycle were removed, Lee-Anna Huisman had her sights set on the road ahead.

“I wanted to be a doctor from a really young age,” recalls Huisman, who grew up in Terrace, B.C. “My parents tell me that as early as kindergarten, I used to say, ‘When I grow up, I’m going to be Dr. Huisman.’”

This May, Huisman will reach the end of her childhood journey, when she crosses the stage to accept her medical degree from UBC.

As one of 293 graduates, she is among the largest graduating class in the history of UBC’s MD undergraduate program.

This year’s ceremony not only marks a record-setting MD student graduation, but an important milestone for the Faculty’s Aboriginal MD admissions program.

In 2002, the program set an unofficial goal of graduating 50 more Aboriginal MDs by 2020. Now, the ambitious goal has been reached five years early.

Since its inception, UBC’s Aboriginal MD admissions program has become a model for other Canadian faculties of medicine. Today, UBC’s MD undergraduate program is training more Aboriginal physicians than ever before, with 35 Aboriginal students currently enrolled in the program, and 17 more offers on their way to new applicants set to start this fall.

“I feel really proud about what we’ve been able to achieve in a little over a decade,” says Aboriginal Student Initiatives Coordinator James Andrew, who has helped to grow the Aboriginal admissions program from its infancy.

For Andrew, reaching the target five years ahead of schedule is a clear testament to the Faculty’s commitment to increasing indigenous representation in the MD program and to helping create more Aboriginal physicians in B.C.

This year alone, five more Aboriginal students, including Huisman, will wrap up their medical training, and embark on the next stage of their journey as medical residents.

“It’s an upward and encouraging trend,” says Andrew, reflecting back to the start of the new millennium: a time when the number of Aboriginal students who had earned MDs from UBC could still be counted on two hands. 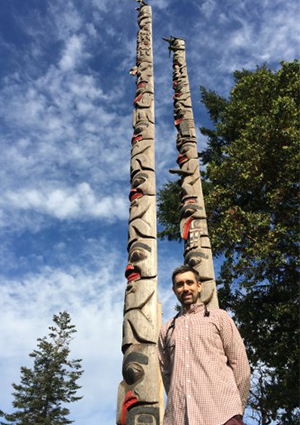 A change of course

In 2001, recognizing that there was a need to increase indigenous representation in the MD program, the Faculty created the Aboriginal MD admissions program.

For more than a decade, the program has been helping to boost enrollment by offering pre-admissions and admissions workshops, counseling support and peer mentoring opportunities to prospective Aboriginal students considering a career in medicine.

The support stretches far beyond the pre-admission years. In fact, many stay connected with the program throughout their four-year medical degree.

“UBC has really created an environment that supports Aboriginal students in pursuing medicine,” says Kelsey Louie, who will join Huisman on stage during graduation this May. “[James] Andrew has been such a support in my life. He said to me early on, ‘We’ll find a way to get there together,’ which really meant a lot. He has repeated this on several occasions, as it truly does feel like a shared journey, with shared success.”

But Andrew and his colleagues don’t restrict their work to students already on the path to medicine. Through community outreach, they also foster interest among Aboriginal youth across the province.

“For some students, it’s the first time they’ve heard about UBC’s medical program,” says Andrew, who travels to communities on Vancouver Island, the Interior, and the north, where he meets face-to-face with local high school, college and university students.

“I grew up on a reserve in Powell River and in Grade 10, I ended up coming to Vancouver to take part in UBC’s Summer Science Program — James Andrew was overseeing the program at the time. We toured the campus, walked through the old anatomy lab and listened to a few lectures. It was my first exposure to university. No one in my family had gone to university before — it was all new to me.”

Less than a decade after first setting foot on campus, Timothy was reintroduced to Andrew during a pre-admissions MD workshop and, by 2005, had joined UBC’s Island Medical Program in Victoria, one of four distinct training sites in the distributed MD undergraduate program.

Today, Timothy is working as a family physician in White Rock and as a clinical instructor with the Faculty of Medicine, where he remains an advocate for Aboriginal health care while helping to train the next generation of physicians.

“There is a real need for more Aboriginal physicians,” says Dr. Timothy, pointing to how a shared cultural understanding — and shared history — can go a long way when delivering care in Aboriginal communities. 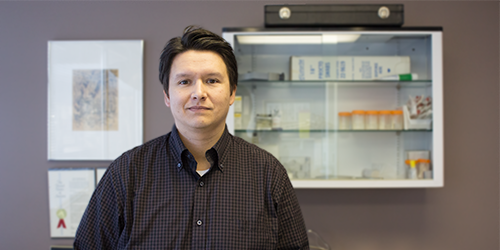 “Working in a First Nations community, all of your morning patients might not show up. In my experience, some patients can’t even worry about their medical issues because they have other, more pressing concerns. They may be dealing with addiction issues, familial issues, financial issues, or mental health issues,” says Dr. Timothy.

“As an Aboriginal physician, you have a unique perspective and often inherent understanding of some of the complex issues faced by Aboriginal people. It’s this understanding that leads to the delivery of culturally sensitive care, which is why it’s so important that we encourage more Aboriginal youth to become physicians.”

Inspiring future generations of Aboriginal youth to pursue a career in medicine is a desire shared by many who have graduated from UBC’s MD undergraduate program, including Nolan Hop Wo, who is now completing his third year of psychiatry residency at the University of Western Ontario.

“The Aboriginal admissions program provided support while I was going through medical school, but it also fostered a passion for me to remember where I come from and to help other Aboriginal students,” says Dr. Hop Wo, who now serves a mentor to Aboriginal students based in the London, Ontario area.

For Huisman, seeing the work of the Faculty’s outreach program continue and witnessing the expansion of a more culturally diverse medical community is important — on both a professional and personal level.

“When I started looking into the prerequisites to get into medicine, I began thinking back on my own experiences as a patient in Terrace and realizing that I had never met an Aboriginal physician,” says Huisman. “I never had someone who was a mentor, or leader with the same background. I’ve thought about that more and more as I have gone through medical school, and it has made me want to give back to my community, and to encourage other young Aboriginal people to pursue medicine.”

This summer, Huisman will have the opportunity to start giving back, as she embarks on the next stage of her journey as a medical resident with UBC’s Indigenous Family Medicine program – and leaves her training wheels behind once and for all.

The First Nations House of Learning hosts an annual ceremony at the First Nations Longhouse for graduating Aboriginal students, with this year’s event being held on May 23. Families and friends fill the Sty-Wet-Tan Great Hall to witness students being called into the Longhouse through the ceremonial graduation door to have their achievements and new status as graduates honoured and celebrated.