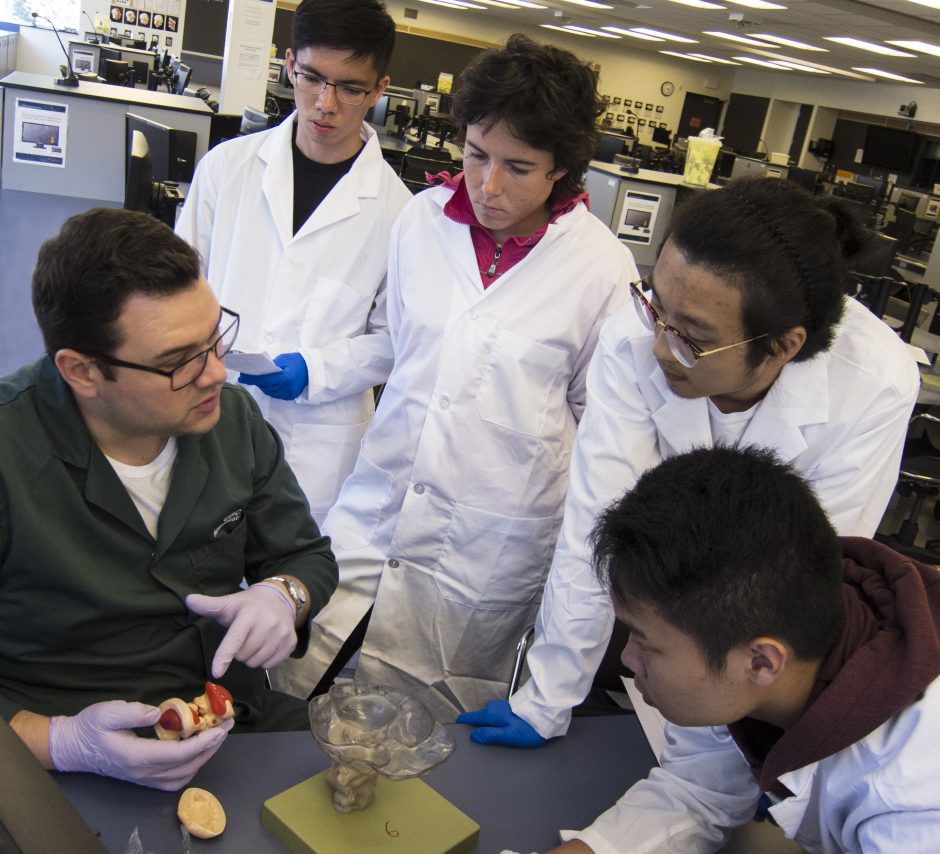 For students in the Vancouver Summer Program in Medicine, most of whom are not native English-speakers, it can also be a tongue-twisting experience.

Consider, for example, the flocculonodular lobe. Tamara Bodnar, a graduate student and instructor in the course “Anatomical Sciences,” finds herself enunciating the term repeatedly and deliberately as she points it out on a preserved human brain for the international students surrounding her in UBC’s Multi-Purpose Lab.

“Don’t worry,” Bodnar says reassuringly. “I can’t say it, either.”

The brain anatomy lab is typical of the experience of students in the Vancouver Summer Program (VSP) in Medicine – linguistically challenging, but also academically rigorous, with ample opportunities to engage with instructors, often one-on-one.

“Look at that,” Parker Holman, another instructor in the course, tells two students, pointing to the brain’s striatum. “It’s striped, it’s striated. Many of the terms for anatomy are based on what it looks like. As we’ve gotten more advanced, the names have become more functional.”

Later, while sketching out a diagram of a neural pathway at the blackboard, he gives a pair of students a key piece of advice for navigating the brain: “Look for places where things cross. That gives you the big picture.”

Cultivating a corps of ambassadors

Enrolment in the VSP in Medicine jumped 69 per cent, to nearly 400, from 2015, in part because the Faculty of Medicine launched its inaugural June Session in addition to expansion of the courses offered, and because the program’s quality – and the attractiveness of its locale – are becoming known to university students around the world.

The VSP in Medicine began in 2014 with just two courses and 85 students, all of them from China. The overwhelming majority of students continue to be Chinese, though this year the program also drew participants from Japan, South Korea, the Philippines, Europe and South America.

“The Vancouver Summer Program is quickly becoming one of the Faculty of Medicine’s most effective mechanisms for engaging internationally,” says Roger Wong, the Executive Associate Dean, Education. “By bringing hundreds of students to UBC for a month, exposing them to a high level of instruction and the attractions of British Columbia, we are effectively creating a corps of global ambassadors for the university – that is, if we deliver on our promise.” 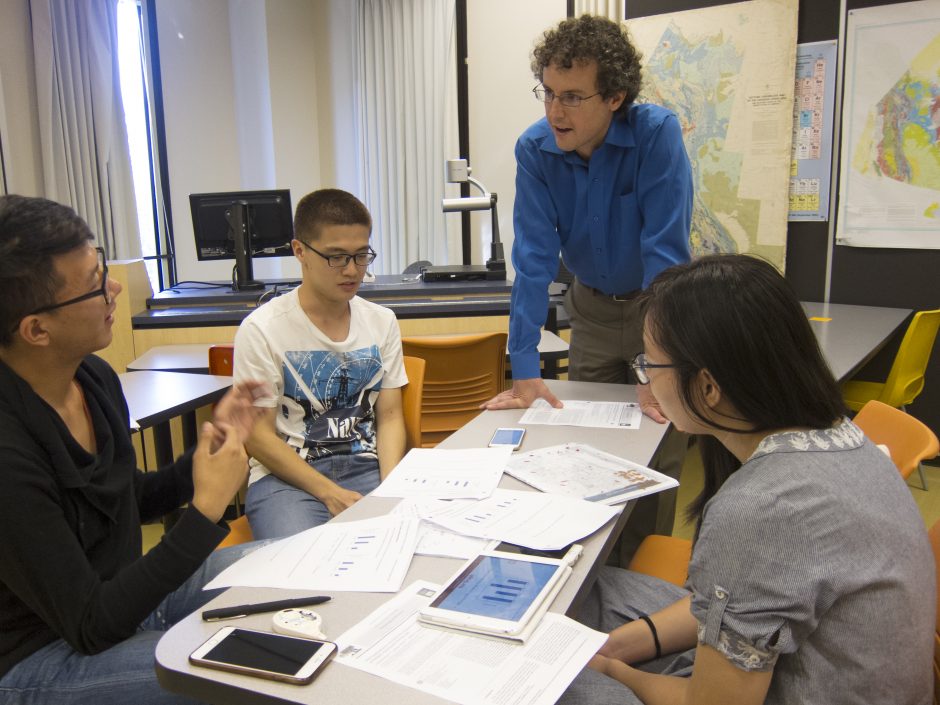 Andrew Horne, an instructor in the Vancouver Summer Program in Medicine, facilitates a group discussion in his course, “Pharmacology and Critical Analysis in Medicine and Science.” Photo credit: Brian Kladko

Based on comments from students in the second session, which started July 15 and ends August 15, the VSP in Medicine is delivering.

Students repeatedly mention how refreshing it is to find themselves sitting at tables with their classmates, working with each other, easily consulting with instructors, instead of just listening to lectures.

“Back in China, we just sit in a room and listen to the teachers tell us the knowledge, and we memorize it and take the examination,” said Zhixiang Zhang, a 21-year-old from China Agricultural University in Beijing. “I think the problem-based learning sessions open our minds, and improve how we communicate with each other.”

Other courses in the VSP in Medicine were devoted to clinical research and clinical medicine (the most popular course by far), neuropsychopharmacology and neuropsychiatry, major mental Illness and psychotherapy, population and public health, recovery and treatment from injury and chronic disease, and medical laboratory science. Students enroll in one course per four-week session. Academic credit is granted at the discretion of each student’s home university.

Zhang and his classmates in “Biochemistry and Molecular Biology in Human Health, Disease and the Environment” spent part of their four-week session with the fictional case of Britney, a young woman who has diabetes. In one session, instructor Evgeniy Panzhinskiy, a postdoctoral fellow and diabetes researcher in the lab of Professor James Johnson, helps them answer that day’s questions, including “Why do doctors prefer to use C-peptide over insulin as a measure of beta-cell function?” and “How does an increase in the amount of injected exogenous insulin protect beta cells from endoplasmic reticulum stress?”

At the end of the session, one of the students asks, “Is there any case of someone being cured of diabetes?”

“That’s what we’re going to talk about tomorrow,” Panzhinskiy promises.

“The classes are very organized,” says Rachel Lai Wing Chuen, a 19-year-old student at The Chinese University of Hong Kong who hopes to become a doctor. “They build on our knowledge, step by step, instead of giving us random facts.”

Chuen was gratified to be taught by Panzhinskiy, a diabetes researcher who “can give us first-hand information and explain very technical procedures about his research.” She also was learning from her classmates, because they hailed from a variety of academic backgrounds – biology, chemistry, even engineering. 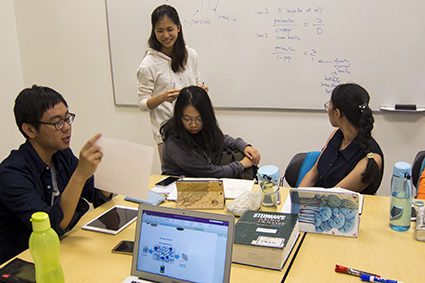 Back in “Anatomical Sciences,” Sara Calvo Alvarez, a 21-year-old studying medicine and psychology at Universidad Autonoma de Madrid, is using the VSP in Medicine to prepare her for her studies back home.

“Autonoma is very famous for being very hard,” Alvarez says. “There is so much content in a short period of time, and if you have any questions, it is difficult to get answers. Teachers there don’t have much time for questions. Here, the teaching is much more polite.”

But Alvarez also was pleasantly surprised by how much fun she was having.

As if on cue, instructor Parker Holman announces that the lab session is concluding.

“Have a great B.C. Day,” he says loudly, projecting so the students scattered about the Multi-Purpose Lab can hear. “You don’t have to go home, but you can’t stay here. It was a great week – a long one, but a good week!”