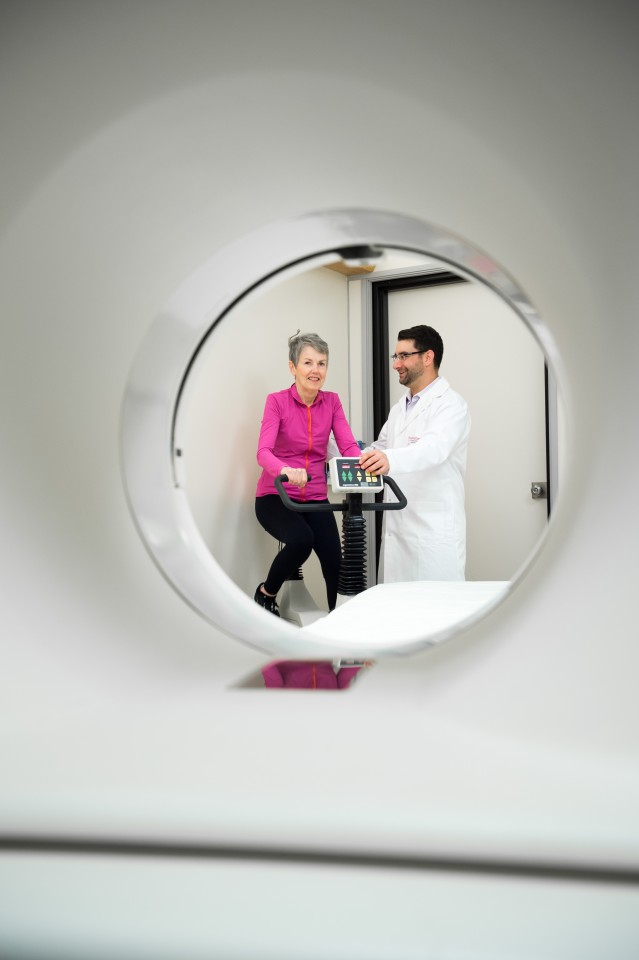 Graduate student Matthew Sacheli with a participant in the study of exercise’s effects on Parkinson’s patients. Photo credit: Don Erhardt

Habitual exercise may confer an advantage in combating Parkinson’s disease by facilitating the brain’s production of a crucial neurochemical, according to preliminary findings from a UBC study.

If the findings hold up in more people, the study could provide a biological explanation for the widely-observed positive effect that physical activity – including Tai Chi, boxing, even tango – seems to have on Parkinson’s disease symptoms.

Parkinson’s disease is caused by a degeneration of the brain cells that produce dopamine, a crucial neurotransmitter, leading to tremors, rigidity, slowness of movement, as well as non-motor symptoms, such as mood changes, depression and cognitive problems. The positive effects of exercise for Parkinson’s disease have been well reported, but the mechanisms of the benefits are unknown.

The findings were presented at the World Parkinson Congress in September and the Society for Neuroscience conference in November. The researchers – Professor and Head of the Division of Neurology Jon Stoessl, PhD candidate Matthew Sacheli and former graduate student (now UBC medical student) Danielle Murray – are only about halfway through their study, which aims to analyze 30 people.

Participants had their brains scanned with positron emission tomography (PET) before and after one of two activities – riding a stationary bicycle for 30 minutes, or undergoing repetitive transcranial stimulation (rTMS), in which magnetic pulses are applied to the brain. rTMS has been shown to stimulate a modest amount of dopamine release in people with Parkinson’s disease.

The post-activity PET scans showed that bicycle-riders who were habitual exercisers had an increase in dopamine in the caudate region of their brains, which is associated with motor and cognitive function. The dopamine boost, to the surprise of the researchers, was even bigger than the well-established boost from rTMS.

Bicycle-riding, however, had little effect on dopamine levels in the caudate of previously sedentary people.

“Habitually active people seem to have brains that are more responsive to exercise,” Sacheli said. “It’s difficult to say what the mechanism is. But if the rest of our participants show the same pattern, it will show that exercise should be encouraged even more than it already is.”

The findings are part of a larger, three-year study looking at the effects of exercise on people with Parkinson’s. Participants undertake a supervised three-month exercise regimen, and are then encouraged – with the help of free gym memberships – to continue regular physical activity. Researchers will be measuring not only dopamine release, but neuroinflammation and changes in neurocircuitry before and after an exercise intervention.

“It will be interesting to see if the previously sedentary people who start exercising start to show the same effects as people who were active before their diagnosis,” Sacheli said.