The Faculty of Medicine is proud to announce that Dr. Sophia Frangou, an internationally-prominent clinician scientist, has joined UBC as the inaugural UBC President’s Excellence Chair in Brain Health. 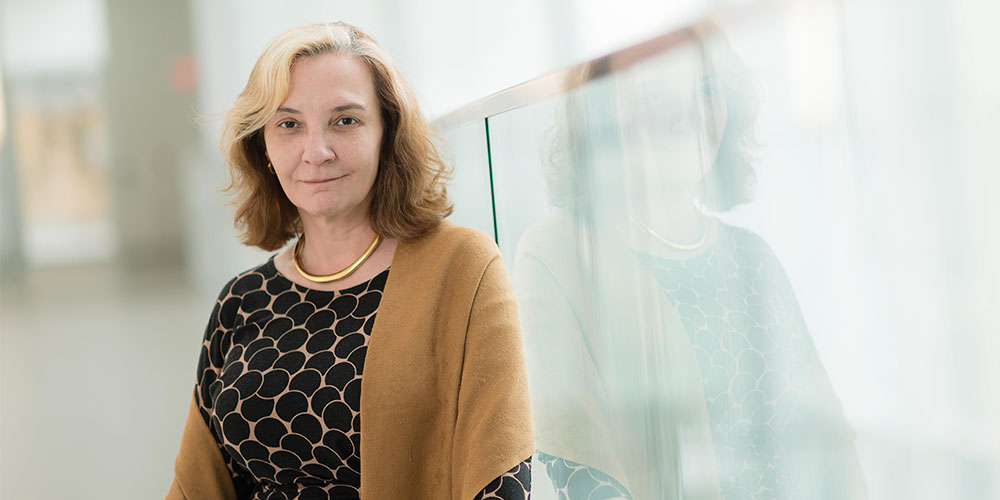 She is also appointed a professor in the faculty of medicine’s department of psychiatry and the Djavad Mowafaghian Centre for Brain Health. The UBC President’s Excellence Chairs were created in order to recruit preeminent academic leaders at the forefront of their respective fields.

“We are thrilled to welcome Dr. Sophia Frangou as professor and UBC President’s Excellence Chair in Brain Health to UBC from the Icahn School of Medicine at Mount Sinai in New York,” said UBC president Santa Ono. “She joins other distinguished faculty members focused on brain health at the university.”

Dr. Frangou’s research focuses on uncovering pathophysiological processes underlying psychosis, with emphasis on schizophrenia and bipolar disorder using clinical, genetic, cognitive, and neuroimaging techniques. She has pioneered the use of brain imaging to identify brain plasticity associated with resilience in those at risk for mood and psychotic disorders and has been instrumental defining shared brain imaging changes across mental disorders, thus paving the way towards neuroscience-informed early intervention and prevention. Dr. Frangou has received numerous awards, most recently the prestigious Colvin Prize for Outstanding Achievement in Mood Disorders Research from the Brain and Behavior Research Foundation.

“UBC offers me the opportunity to work with leading clinician scientists like Dr. Lakshmi Yatham and collaborate with an impressive group of internationally recognized neuroscientists,” Dr. Frangou said. “As a clinician-scientist, I value the opportunity to conduct my research in the Canadian healthcare environment, and specifically the opportunity to build on the excellent infrastructure provided by UBC to create centres of excellence in psychiatry offering patient-centered care enhanced by the close interface with research, where discoveries can translate efficiently from bench to bedside.”

“UBC offers me the opportunity to work with leading clinician scientists like Dr. Lakshmi Yatham and collaborate with an impressive group of internationally recognized neuroscientists.”

Dr. Frangou is an influential advocate for diversity in academic psychiatry with specific focus on closing the gender gap in publishing, funding and leadership. She is the editor and author of Women in Academic Psychiatry: A Mind to Succeed.

“The psychiatry department is very fortunate to have secured the recruitment of Dr. Frangou,” said Dr. Lakshmi Yatham, psychiatry department head. “We are confident that, as a member of our academic faculty, she will not only bring world-class expertise and innovation to our learners, but will also make important contributions to our scientific research community which will advance the department as a leading-edge centre for mental health research and training.”

Dr. Frangou is a British psychiatrist who trained at Maudsley and Bethlem Royal Hospitals in London, UK and obtained her Master’s Degree and PhD from the University of London. Dr. Frangou served as professor of psychiatry in the department of psychiatry at the Icahn School of Medicine at Mount Sinai in New York since 2013, and prior to this, she held the post of reader in psychiatry at the Institute of Psychiatry, Psychology and Neuroscience at King’s College, London, UK.