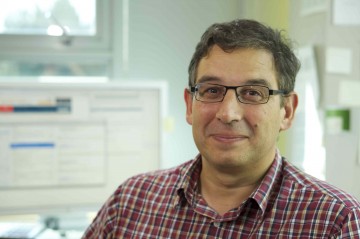 Sam Aparicio is part of a global research team that aims to create a virtual reality three-dimensional tumour map, a tool that will allow scientists and doctors to examine – for the first time and in unprecedented detail – the cellular and molecular make-up of a patient’s entire tumour to improve diagnosis and treatment for the disease.

The team that includes Dr. Aparicio, a Professor in the Department of Pathology and Laboratory Science, is one of the first global research teams to be recipients of Cancer Research UK’s Grand Challenge. He and his collaborators will receive up to $33-million.

According to an article in the Globe and Mail, the team aims to create a representation of a tumour that can be explored by donning a pair of goggles and virtually walking around inside the image, allowing observers to see the relationship between various cells in tumours and actually interact with them.

“This will help researchers see and understand breast tumours in new ways and could help answer important questions, such as why tumour cells can become resistant to drugs, what role is played by immune cells found in tumours and how tumours grow over time,” the Globe and Mail said.

Dr. Aparicio, who was appointed by UBC as a Distinguished University Scholar last week, told the Globe and Mail that one of the goals is better predict how tumours will change over time and what treatments will be most effective in stopping certain cancer cells in their tracks.

“You can’t interact with millions and millions of data points on a 2-D screen,” he said. “What we’re doing here is on a scale I don’t think anyone has attempted before.”

This new Cancer Research UK initiative has been overseen by a panel of world-leading researchers and chaired by Rick Klausner, former director of the U.S. National Cancer Institute.

“Together, we will redefine cancer – turning it from a disease that so many people die from, to one that many people can live with,” said Sir Harpal Kumar, Cancer Research UK’s chief executive. “We will reduce the number of people worldwide affected by cancer and achieve our goal of beating cancer sooner.”