Researchers at the University of British Columbia, BC Children’s Hospital and BC Women’s Hospital + Health Centre have designed a therapeutic robot that simulates human skin-to-skin contact, helping reduce pain for babies in the neonatal intensive care unit at BC Women’s. 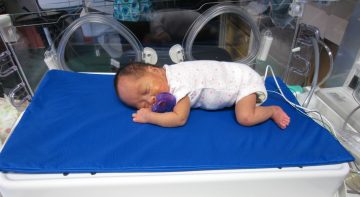 The Calmer robot replaces the standard mattress in an incubator and mimics the parent’s heartbeat sound, breathing motion and the feel of human skin.

Calmer, the therapeutic robot, was created with this in mind, helping mimic the parent’s heartbeat sounds, breathing motion and the feel of human skin.

In a study published today in Pain Reports, the researchers found that Calmer worked no differently for reducing pain-related indicators in premature, or preterm, infants than hand hugging—a technique where a caregiver places their hands gently to contain the infant’s head, arms and legs in a curled position—during blood collection. The findings suggest the robot could be a helpful tool for pain relief when parents are not available.

“The best treatment is for parents to hold babies skin-to-skin, but if that’s not an option, we wanted to be able to provide something else that could help,” said the study’s lead author Liisa Holsti, the Canada Research Chair in Neonatal Health and Development, an associate professor in the department of occupational science and occupational therapy at UBC, and an investigator at BC Children’s Hospital and Women’s Health Research Institute (WHRI).

“We found that there were no significant differences between Calmer and human touch—the robot provided the same level of pain relief for infants as a human,” Holsti added. “While there is no replacement for a parent holding their infant, our findings are exciting in that they open up the possibility of an additional tool for managing pain in preterm infants.”

The researchers collaborated with engineers at the British Columbia Institute of Technology to design and build Calmer. The robot is designed as a platform that fits inside a NICU incubator, replacing the standard mattress. Calmer’s heart and breathing rate can be adjusted to mimic a parent’s heart rate. The robot is also covered with a skin-like surface that moves up and down to simulate breathing.

To test Calmer’s effectiveness at reducing pain, the researchers conducted a randomized clinical trial with 49 premature infants admitted to the NICU at BC Women’s. After obtaining informed consent from parents, the researchers randomly allocated infants who were born prematurely between 27 and 36 weeks of pregnancy to either the Calmer or human touch group while they had their blood drawn. Infants in both groups also received a soother.

Babies in the human touch group received hand hugging. Previous research has shown that hand hugging—the current standard treatment for premature babies at BC Women’s—is an effective strategy for reducing pain in these infants when having their blood drawn. 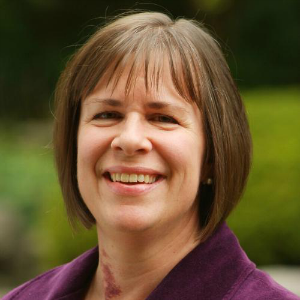 Using a variety of measures to assess pain, such as the babies’ heart rate, facial and hand movements, the researchers found that Calmer and human touch were no different for reducing pain. Both groups of infants experienced a reduction of two points on the pain scale, which is considered “clinically significant,” said Holsti.

The findings are especially important since previous research has found that early exposure to pain has a negative effect on premature babies’ brain development. The researchers are now looking at the effects of Calmer for stress reduction in the NICU over longer periods.

Holsti said she hopes all incubators will be designed with this technology embedded in them in the future.

For Vancouver mom Lauren Mathany, the potential benefits of the Calmer robot are promising, especially for parents who aren’t able to be in the hospital with their babies at all times, she said.

Mathany’s twin daughters, Hazel and Isla, were born prematurely 24 weeks into her pregnancy. Weighing less than two pounds each, the tiny babies spent the next four months in the NICU at BC Women’s Hospital + Health Centre.

“We were very lucky that we lived fairly close by, but even then, we could not be at the hospital 24-7,” said Mathany. “It would be great to have an additional tool like Calmer to help out.”