When the opioid overdose crisis was declared a public health emergency in British Columbia in 2016, policymakers and media turned to experts at UBC for insight into the causes fueling the overdose deaths and possible solutions for preventing them.

The UBC researchers – including those who had gathered the scientific evidence for supervised injection sites – gave expert insight into various approaches to reduce drug-related harms, respond to overdoses and expand access to life-saving treatments for opioid addiction. 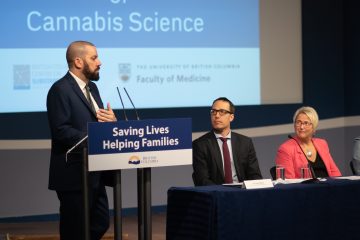 Dr. M-J Milloy, the first Canopy Growth Professor of Cannabis Science at UBC, speaks as Dr. Evan Wood and Judy Darcy, BC Minister of Mental Health and Addictions, look on at the announcement of the professorship on November 23, 2018 at UBC Robson Square.

As effective as these responses have been, overdose deaths in the province continue at unprecedented rates, which is why people are now looking for innovative solutions to respond to the crisis.

The BC Centre on Substance Use (BCCSU) – the newest research centre of the UBC Faculty of Medicine – led by Dr. Evan Wood, Professor of Medicine and Canada Research Chair, is aiming to develop new responses by expanding its search for innovative, health-focused and evidence-based strategies to end the opioid overdose crisis.

Focused on transforming substance use policy and care in British Columbia through the integration of evidence-based education, research and care, the BCCSU has been investigating previously unexplored treatments. Perhaps the most innovative among them is the potential of psychedelic-assisted therapy in treating opioid and other substance use disorders, as well as mental health issues.

However, psychedelic substances such as ayahuasca, psilocybin, LSD, and MDMA are still illegal in Canada, making funding such research challenging.

The philanthropic community is stepping up to fill this funding gap, inspired by an emerging body of research suggesting psychedelics may have therapeutic benefits, and by the creation of a scientifically rigorous centre in the BCCSU. 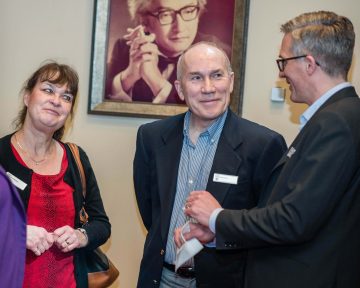 Barbara and William Simoes speak with Dr. Kenneth Tupper of the BC Centre on Substance Use at the UBC Connects event on February 11, 2019 that featured Michael Pollan presenting about food, plants and psychedelics as revolutionary approaches to human health and well-being.

An Alberta couple, William and Barbara Simoes, has committed $90,000 to support a full-time research coordinator to help launch the UBC Psychedelic Research Laboratory at the BCCSU, which also attracted $160,000 in support from an anonymous donor for the lab’s first study of psilocybin.

“Canada used to be a world-leader in psychedelics research in the 1950s and early 1960s before the substances were made illegal,” says Dr. Wood. “The re-emerging paradigm of psychedelic medicine may open clinical doors and therapeutic doors long closed.”

The legalization of adult use of cannabis in Canada may point the way for how research in psychedelics could move forward. The BCCSU will explore gaps in evidence around therapeutic benefits of cannabis as another innovative approach to substance use and addiction, with philanthropy once again stepping up to move research forward.

The world’s largest cannabis company, Canopy Growth, has committed $2.5 million to establish the Canopy Growth Professorship in Cannabis Science in the UBC Faculty of Medicine. Dr. M-J Milloy, Assistant Professor of Medicine, was appointed to the professorship, which will facilitate clinical trials to study whether cannabis could serve as an opioid substitute or help reduce cravings for opioid users. Similar to psychedelics, emerging evidence suggests cannabis could help those with substance use addiction – but only further investigation will tell.

“Substance use research in general doesn’t receive as much funding as it warrants in comparison to the burden of the disease,” says Dr. Wood. “Without support from individuals and industry partners who believe in us and the potential of this work, this research wouldn’t be possible. We’re grateful for the opportunity to explore new ways of helping people for whom standard treatments haven’t worked, but who equally deserve to live life in good health.”