Photo exhibit goes behind the scenes at the Island Medical Program 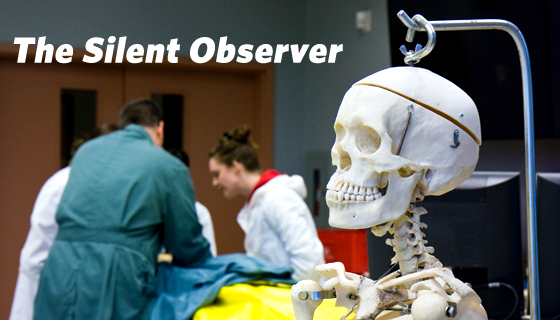 (Adapted from the University of Victoria’s The Ring community newspaper)

His most famous photo is of Prime Minister Pierre Trudeau sliding down a banister. But of all he’s shot in 60 years as a photographer, Ted Grant’s favourite work is the photo series he has done of doctors and nurses at work.

It’s a project that began 30 years ago as Grant was lying on a gurney about to head into surgery at the Ottawa Civic Hospital. “I was on the table and all of a sudden I thought ‘What a great place to shoot. There are lights, there are people, there are all kinds of things going on.”

Later that year Grant asked the surgeon if he could follow him around with a camera for a week. The surgeon agreed. Two books and a Bravo documentary resulted from the years of shooting that included hospitals across Canada and the US. In the last five years he started photographing UBC medical students studying to be doctors in the Island Medical Program, based at the University of Victoria.

The result is “The Silent Observer,” an exhibit of 30 digital black-and-white photos of the students that Grant followed through their days and photographed. The exhibit opened Feb. 8 at Maltwood Prints and Drawings Gallery at the McPherson Library, University of Victoria.

As a freelance photojournalist from the 1960s through 1990s, Grant travelled the far reaches of Canada shooting photo essays for the National Film Board and shooting world events for Weekend Magazine and The Canadian Magazine. He lost hearing in one ear while shooting the 1967 Six Days War in the Middle East. He covered every Winter and Summer Olympic Games from 1972 to 1992. Over 280,000 of his images are held in the National Archives of Canada and another 100,000 are in the National Gallery of Canada. UVic awarded him an honorary doctorate of laws degree in 2008.

It was during the 1968 Liberal convention that Grant took his famous shot of Trudeau sliding down a banister in the Chateau Laurier hotel. He was the only photographer present when Trudeau made his move.

“I heard people start to laugh and turned around and there he was. I went ‘Oh my God!’ Click!”

Working with medical students was no different than working with world leaders, says Grant, now 82. It’s a relationship based on trust, one in which he stays respectfully in the background with a trio of Leica digital cameras around his neck.

“I shoot by what I feel. There isn’t anything analytical going on. It’s like ‘Geez, look at that.’ Click.”

He took photos of medical students in class at UVic as well as on rounds at two Victoria hospitals and at teaching clinics up and down Vancouver Island.

Medical student Amy Jean Singleton-Polster (IMP Class of 2012) says she was nervous at first as Grant followed her and another student as they conducted a foot care clinic at Our Place, a Victoria homeless shelter.

“But it became easier, and he snapped away as we washed and clipped. He was always very professional yet fun to work with,” she says.

Grant’s favourite shot from the project is of freckle-faced student Anna Isbister (IMP Class of 2009) examining a patient’s eyes.

“Her eyes are beautiful and so intense; there is almost a full frame of her face and the instrument she’s using—so cool.”

“The Silent Observer” runs until April 2 at the Maltwood Prints and Drawings Gallery in McPherson Library, University of Victoria. An opening reception with Ted Grant in attendance will be held Tuesday, March 6, from 4 to 5:30 p.m. More information: http://uvac.uvic.ca