An international team led by human genetic researchers at the University of British Columbia and Vancouver Coastal Health has identified the latest gene associated with typical late-onset Lewy body Parkinson’s disease (PD), with the help of a Canadian Mennonite family of Dutch-German-Russian ancestry.

Twelve of the 57 members of the Saskatchewan family who participated in the study had previously been diagnosed with PD. 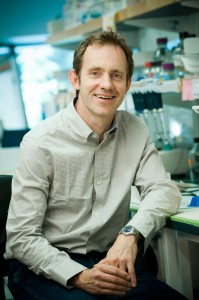 Matthew Farrer, the Professor in the Department of Medical Genetics who led the research, notes that unequivocal confirmation of the gene’s linkage with PD required DNA samples from thousands of patients with PD and healthy individuals. He refers to the new discovery as the “missing link,” as it helps to unify past genetic discoveries in PD.

“A breakthrough like this would not be possible without the involvement and support of the Saskatchewan Mennonite family who gave up considerable time, contributed clinical information, donated blood samples, participated in PET imaging studies and, on more than one occasion following the death of an individual, donated brain samples,” says Farrer, Canada Excellence Research Chair in Neurogenetics and Translational Neuroscience and the Dr. Donald Rix BC Leadership Chair in Genetic Medicine.

“We are forever indebted to their generosity and contribution to better understanding – and ultimately finding a cure – for this debilitating disease.”

The mutation, in a gene called DNAJC13, was discovered using massively parallel DNA sequencing. Conclusive evidence came from the identification of the gene mutation in several other families across many Canadian provinces, including British Columbia.

“This discovery is not only significant for researchers, but also for those families carrying this genetic mutation and afflicted with this disease in that it offers hope that something good might yet result from their suffering,” says Bruce Guenther, President of the Mennonite Brethren Biblical Seminary Canada, a community leader and spokesperson for the family that participated in the study.

“The family involved is very grateful for the research team’s respectful, collaborative and sensitive approach, and we hope that this enables the discovery of more effective treatments, and hopefully eventually a cure.”

The discovery resulted from a longstanding collaboration with neurology colleagues, Ali and Alex Rajput at the University of Saskatchewan and Silke Cresswell and Jon Stoessl at UBC. The research team also includes scientists from McGill University, the Mayo Clinic in Florida, and St. Olav’s Hospital in Norway.

Farrer shared the discovery last week with the medical community as part of his keynote speech in Dublin today at the 16th International Congress of Parkinson’s Disease and Movement Disorders (Plenary Session V: Is it time to change how we define Parkinson’s disease?) Details of the study was presented at the conference and is being submitted for publication.

“The identification of DNAJC13 will certainly be of interest to people around the world who trace their family history to the nineteenth-century Mennonite colonies in Russia, and who have family members suffering from Parkinson’s disease,” Guenther adds.

The late-onset form is the most common type of PD. The risk of developing late-onset PD increases with age but most patients begin showing symptoms in their late 60s and early 70s.

Once considered a sporadic disease, latest studies have shown genetic components of PD that provide the foundation for neuroscience research and potential treatment targets.

Approximately 15 per cent of people with PD have a family history of the disorder. There is a higher rate of PD in families where two or more members are affected, possibly due to a shared genetic susceptibility among blood relatives.

UBC Prof. Matthew Farrer is an internationally renowned expert in the genetic aspects of PD and related dementia. He and his team have helped identified many genes involved in PD by analyzing DNA from families throughout the world.

Farrer and his research team are based at the Department of Medical Genetics and at the Brain Research Centre at UBC and Vancouver Coastal Health Research Institute. He has had an adjunct position at the Faculty in Medicine (Neurology) at the University of Saskatchewan since 2003.