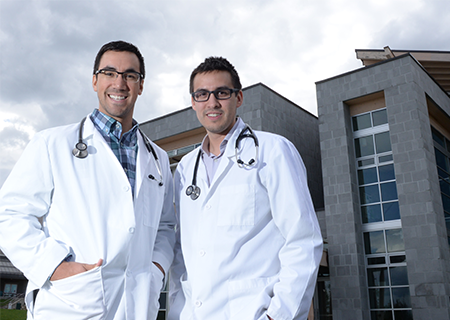 From childhood to high school to medical school, Nathan Teegee and Todd Alec have shared geographic, cultural and academic bonds along the way. Now graduating from the Northern Medical Program (NMP), the two are looking ahead to residency, and diverging paths – Dr. Teegee pursuing dermatology in Vancouver and Dr. Alec undertaking family medicine in Prince George. But with their sights both set on practicing in the North, they will definitely be meeting up again.

Growing up around the Fort St. James area (part of Dakelh territory), Dr. Teegee, from Takla Lake Nation, and Dr. Alec, from Nak’azdli, knew early on they wanted to be doctors. Dr. Teegee’s grandmother, who worked at the local hospital as a janitor and Carrier translator for First Nations patients, helped form his initial interest in medicine. And Dr. Alec followed in the footsteps of two Nak’azdli nurses who inspired him to go into the health profession.

“Lisa Sam and Renada Walstrom are local nurses who have done incredible work in our community and I wanted to do something similar to them, so medical school became a focus for me,” says Dr. Alec.

When he and Dr. Teegee both moved to Prince George to attend the same high school, they became good friends – with a shared passion for medicine. And they lost no time in starting preparation for medical school applications.

James Andrew, Aboriginal Student Initiatives Coordinator with UBC Faculty of Medicine, still remembers the first time he met the two. “It was the fall of 2004 and we had just started offering what is now our annual Aboriginal preadmissions workshop. At the time, it was intended for post-secondary students only, and when Nathan and Todd came to our session, I didn’t realize they were still in high school.”

“These young men were so mature and driven, and that caught my eye,” recalls James. “They really wanted to become physicians. I kept in touch with them over the years, and was excited when I heard that they were finally applying to UBC’s medical undergraduate program. I am so proud of them both.”

In August 2012, Drs. Teegee and Alec once again became classmates, this time as part of the NMP, two of just a handful of First Nations students in the program.

Related story: Ahead of schedule

During their four years of study, they have been able to share helpful insights on Aboriginal culture and patients with fellow students.

“We were able to offer different perspectives on various topics that opened up more discussion opportunities for us and our peers, such as approaches to patient care,” explains Dr. Teegee. “For example, understanding cultural differences in body language, such as eye contact, or the little things that can go a long way, like using humour with First Nations patients.”

“And also taking the time to figure out why a remedy might not be working and asking questions to better appreciate obstacles,” adds Dr. Alec. “First Nations people face a lot of barriers in accessing health care, especially if they live in very remote areas, and if a health practitioner can exercise some innovation, they could help in better accommodating issues.”

“Our ongoing message has been, basically, ‘if we can do it, you can do it’,” notes Dr. Teegee. “We highlight studying tools and tips, the importance of career planning, keeping course prerequisites in mind, and also applying for available bursaries and scholarships, all with the end goal of creating a bright future.”

And the future, for these two graduates, looks exciting. Both are planning to set up practice in Northern B.C. after residency, and contribute to regional medical education and health service initiatives.

“I would like to work, hopefully, in a more rural setting, and pursue preventative medicine as one area of focus,” says Dr. Alec. “I want to help people reduce their risks for disease and chronic illnesses, especially if these are due to a lack of access to health care, and try to advocate for changes that help reduce barriers to service.”