Published today in CMAJ Open, the study is based on a 2017 online survey of more than 1,000 adults in British Columbia. According to the study, more than 80 per cent of respondents held positive attitudes towards immunization. Similarly, more than 70 per cent supported additional vaccine research and more vaccine information and services. 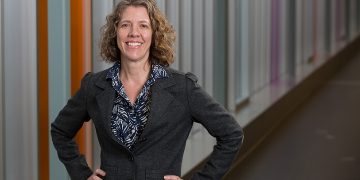 Julie Bettinger, associate professor in the Department of Pediatrics at UBC

When asked about policy options to increase vaccination rates:

Survey respondents were representative of the BC population by gender, age, geographic residence and percentage of household with children younger than 19 years of age.

“Our findings provide evidence that most British Columbians strongly support vaccination and expect parents to vaccinate their children,” said lead author Dr. Julie Bettinger. “Based on our data, policy makers have a number of options they could use to increase vaccine coverage.”

Bettinger is an associate professor in the Department of Pediatrics at UBC and investigator with the Vaccine Evaluation Center at BC Children’s Hospital.

Importantly, only a minority of respondents supported policies that punish parents who do not vaccinate their kids, such as withholding government benefits like the Canada child benefit.

“Some other countries have implemented policies that create financial penalties for not vaccinating, but our research indicates such measures would not be acceptable to most British Columbians,” said Bettinger. “Implementing unpopular policy always has the potential to backfire. Our research provides a snapshot of popular attitudes towards vaccines and vaccine policy. It is important context for policy makers tackling the growing public health issue of outbreaks of vaccine-preventable illness.”

Previous research has shown that one to three per cent of people cannot be convinced to vaccinate and that roughly 15 to 20 per cent have questions and want more information.

“While this new study shows widespread support for policies that encourage parents to vaccinate their kids, we know that there are individuals who will still be hesitant to vaccinate,” said Bettinger. “Any parents who are concerned about vaccines should reach out to their pediatrician, family doctor or public health nurse.”

Bettinger also recommends reliable online resources such as Immunize BC, the Public Health Agency of Canada and CANImmunize.

This research was funded by the British Columbia Immunization Committee and received indirect support from BC Children’s Hospital Foundation.