How do men and women store fat differently? Ask the fruit fly.

When it comes to determining how women and men store fat differently, it turns out fruit flies may hold the key.

People and fruit flies are astonishingly alike genetically. In fact, nearly 75 per cent of disease-causing genes in humans can be found in the fly in a similar form.

In a new study, recently published in PLOS Biology, researchers from UBC’s faculty of medicine used fruit flies to make a fundamental genetic discovery about differences between how males and females store and metabolize fat.

The study’s senior author, Dr. Elizabeth Rideout, an assistant professor in the department of cellular and physiological sciences, and graduate student Lianna Wat, explain what this discovery means for the future of treating and managing metabolic diseases, including Type 2 diabetes and cardiovascular disease.

How is fat storage and metabolism different between men and women? 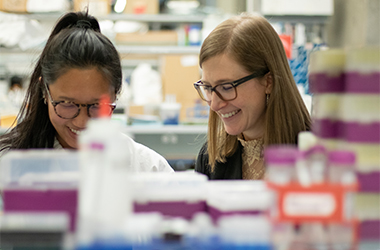 In most animals, females store more fat than males, and break it down more slowly. In humans, we see similar trends between men and women. While this difference in fat metabolism between men and women is partially explained by lifestyle, biological factors, such as sex hormones and sex chromosomes, also play a role.

A lot of research has identified hundreds of fat metabolism genes that are influenced by sex hormones and sex chromosomes, but less is known about which of these genes cause the male-female difference in fat storage.

What is the benefit of studying the fruit fly?

Nearly 75 per cent of human disease-causing genes can be found in the fruit fly in a similar form. Given that female flies also store more fat than males, and metabolize it more slowly, this makes them a perfect animal to enrich our understanding of the genes that affect male-female differences in fundamental cellular processes like fat metabolism.

What did your study find?

We identified a fat metabolism gene that regulates the male-female difference in fat storage. In flies without this gene, the males and females store exactly the same amount of fat. This discovery paves the way for identifying metabolic genes that control male-female differences in other aspects of development and physiology.

What are the implications for people?

Our studies take place at the earliest stage of the discovery process. But we hope that by identifying genes that explain why males and females have different amounts of fat, we will be better able to understand why men and women have differences in the risk of diseases associated with abnormal fat storage, such as cardiovascular disease and Type 2 diabetes.

Knowing which genes affect fat storage and metabolism is also an important first step in developing more precise treatments to tackle metabolic disease. At present, not many drugs are available to treat abnormal fat metabolism, and those that are available often work better in either men or women. By identifying genes that influence fat storage in male and female flies, we will gain vital information on developing new therapies that are tailored to women, and to men, in treating abnormal fat metabolism.