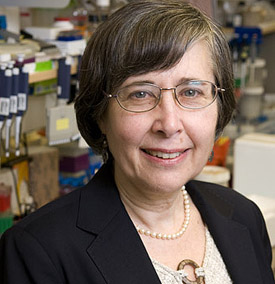 Scientists in the Faculty of Medicine and the BC Cancer Agency used a single mutant gene to create breast cancer in mice, up-ending a longstanding assumption that development of human breast cancer requires a long time to accumulate multiple genetic changes.

The finding, published in Nature, is an important advance towards understanding the cellular changes that can lead to human breast cancer.

Connie Eaves, Professor in the Department of Medical Genetics and a Distinguished Scientist at the BC Cancer Agency, led the team that inserted a mutant gene into normal human breast tissue cells and then implanted those cells in mice, where they formed tumours.

The researchers used “DNA barcoding” to track the growth of many individually transformed cells after they were transplanted into a single mouse. The researchers were thus able to observe how the breast cells change even before they have become fully malignant.

“We are excited to have developed an approach that, for the first time, makes it feasible to study the initial changes that cause a normal human breast cell to become malignant,” Dr. Eaves says. “This is important because this methodology can now be widely used to perform experiments that were previously thought to be impossible.”

“There is tremendous potential for this approach to bring about improved outcomes based on the identification of early changes that should be shared by all cells in a given breast tumour,” she says. “Such changes could also provide new indicators for identifying breast cancers at a much earlier stage when they might be more effectively treated.”