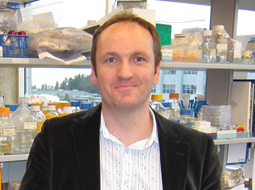 James Johnson, Associate Professor in the Department of Cellular and Physiological Sciences, has won a $625,000 grant from Novo Nordisk to pursue research that could upend conventional notions about the interplay between insulin, obesity and diabetes.
Insulin is the hormone that enables glucose to be stored by muscle and fat cells, but there is still much scientists do not understand about its complete effects on the body.

Dr. Johnson and his team will use the Novo Nordisk Diabetes Innovation Award to continue his experiments on the effects of varying levels of insulin and different types of insulin, testing the idea that high levels of circulating insulin might actually be a cause of obesity, rather than an indirect effect.

The commonly accepted explanation for Type 2 diabetes, also known as “adult-onset” diabetes, is that obesity causes tissues to become resistant to insulin, after which the pancreas responds by producing even more of the hormone. Diabetes is thought to result when the pancreas’ capacity to produce insulin wears out, leading to elevated blood sugar.

Dr. Johnson has employed a unique feature of mouse physiology  – the fact that mice have two types of insulin genes rather than one – to test a hypothesis that could not otherwise be tested. Insulin 1, which is unique to mice, is found only in the pancreas, whereas Insulin 2, like human insulin, can be found in the pancreas and the brain. That feature allows Dr. Johnson to isolate the effect of pancreas-produced insulin from brain-produced insulin for the first time, using mice lacking either the Insulin 1 or Insulin 2 gene. This is important because previous research has shown that insulin can have potent effects on the brain, controlling appetite and thus food intake.

“If we find opposing roles for pancreas-produced insulin versus insulin in the brain, we might have to conclude that obesity might be caused in part by low brain insulin levels and high levels of insulin in the blood” Dr. Johnson says. “That would lead to a thorough re-thinking of how we prevent and treat obesity and diabetes.”

The Novo Nordisk Diabetes Innovation Award Program was launched in 2011 to help scientists substantiate early research efforts that could result in new treatment options for diabetes and obesity.

Headquartered in Denmark, Novo Nordisk is a global healthcare company with 88 years of innovation and leadership in diabetes care. The company also has leading positions within haemophilia care, growth hormone therapy and hormone replacement therapy. For more information, visit novonordisk.com. More information about the Novo Nordisk Diabetes Innovation Award Program can be found at www.novonordisk-us.com/innovation.