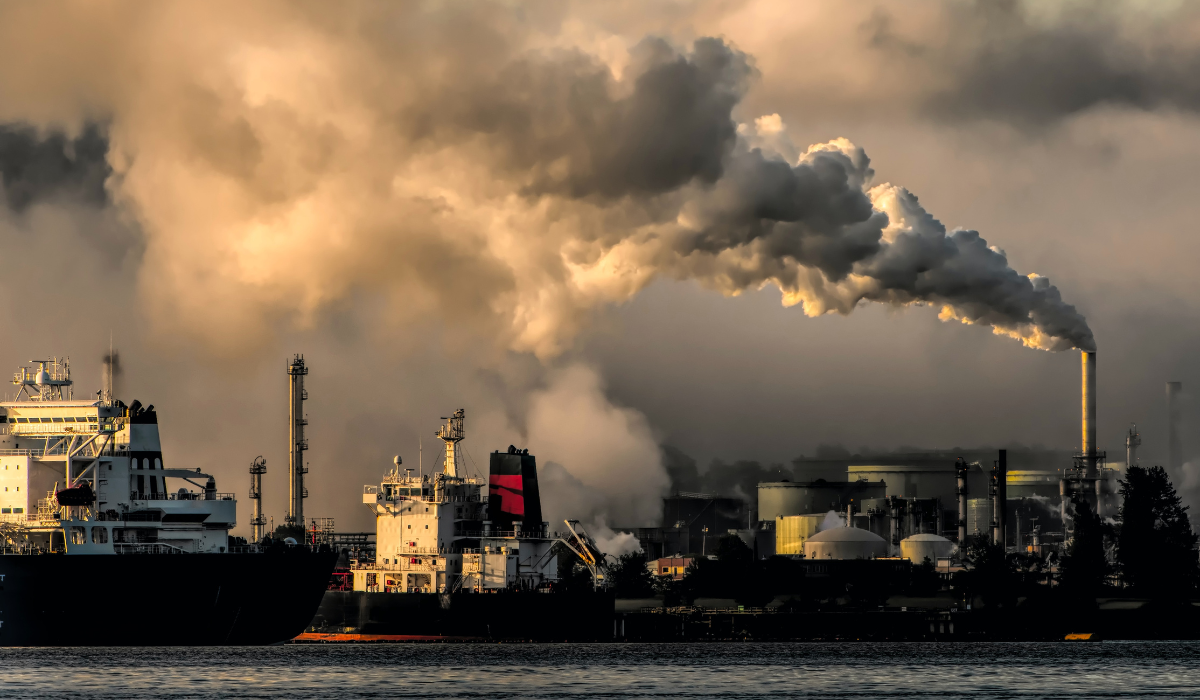 Levels of air pollution well below national and international air quality guidelines are associated with an increased risk of death, according to a new Canada-wide study led by researchers at the University of British Columbia.

The study, published today in a Health Effects Institute (HEI) report, provides an in-depth analysis of air pollution levels across Canada and their relationship with mortality. The findings reveal that long-term exposure to even the lowest levels of fine particulate matter — microscopic air pollutants from sources like wildfires and fossil fuel emissions — poses a significant health risk. 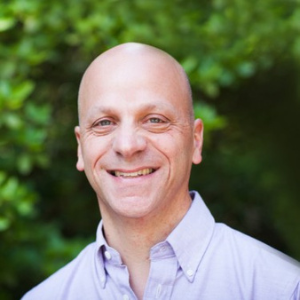 “While Canada has some of the best air quality in the world, this is compelling evidence of the harmful effects of air pollution at levels below current standards and guidelines,” said Michael Brauer, the study’s lead author and a professor at UBC’s school of population and public health. “These findings suggest important health benefits could be gained from continued reductions in air pollution and more stringent regulatory standards both here at home and around the world.”

For the study, the researchers combined satellite data, air monitor sampling and atmospheric modeling to estimate outdoor exposures to fine particulate matter across Canada from 1981 to 2016. The team then conducted a comprehensive epidemiological analysis of 7.1 million Canadian adults to evaluate the risk of death at different exposure ranges.

The analysis revealed vast differences in Canadians’ exposure to fine particulate matter depending on where they lived. For instance, average annual concentrations of fine particulate matter were significantly higher in Canada’s largest cities (8 to 16 μg/m3), compared to lower levels measured in rural areas (2 to 6 μg/m3). The highest annual concentrations (16 μg/m3) were observed in the cities of Toronto, Vancouver, Hamilton and Quebec City between 1981 and 1990.

Notably, average air pollution levels were highest during the first decade of the study, before showing a steady decline over the next 25 years.

“While it’s positive that air pollution concentrations have declined in many higher-income countries, these findings suggest that even low levels of long-term exposure can have serious impacts on a person’s health,” says Dr. Brauer. “In recent years, we’ve also seen a concerning uptick in air pollution due to climate change and increasing wildfire events, which threatens a lot of this progress.”

The study revealed that low levels of fine particulate matter (2.5 to 8 μg/m3), which were once thought to be relatively harmless to human health, increased the risk of premature death. Health Canada currently estimates that air pollution contributes to 15,300 premature deaths each year.

“These findings suggest important health benefits could be gained from continued reductions in air pollution and more stringent regulatory standards both here at home and around the world.”
Dr. Michael Brauer

“If we take what we now know about the risk from low levels of pollution and extend it worldwide, whereas before we were estimating about four million annual deaths from air pollution, that number increases by another 1.5 million,” says Dr. Brauer.

The analysis showed that exposure to air pollutants was associated with increased risk of death due to a variety of causes including cardiovascular disease, heart disease, diabetes, pneumonia, respiratory disease and COPD.

In 2012, Canada adopted new Canadian Ambient Air Quality Standards (CAAQS) for several air pollutants and set decreasing target concentrations for 2015, 2020 and 2025. The current 2020 standards recommend that average fine particulate matter concentrations be below of 8.8 μg/m3 In the United States, the National Air Quality Standards recommend an average concentration of 12 μg/m3, while the World Health Organization recently updated its Air Quality Guidelines to recommend an annual mean of 5 μg/m3. Each of these standards is well above the 2.5 μg/m3 levels that Dr. Brauer and his team found to increase mortality risk. 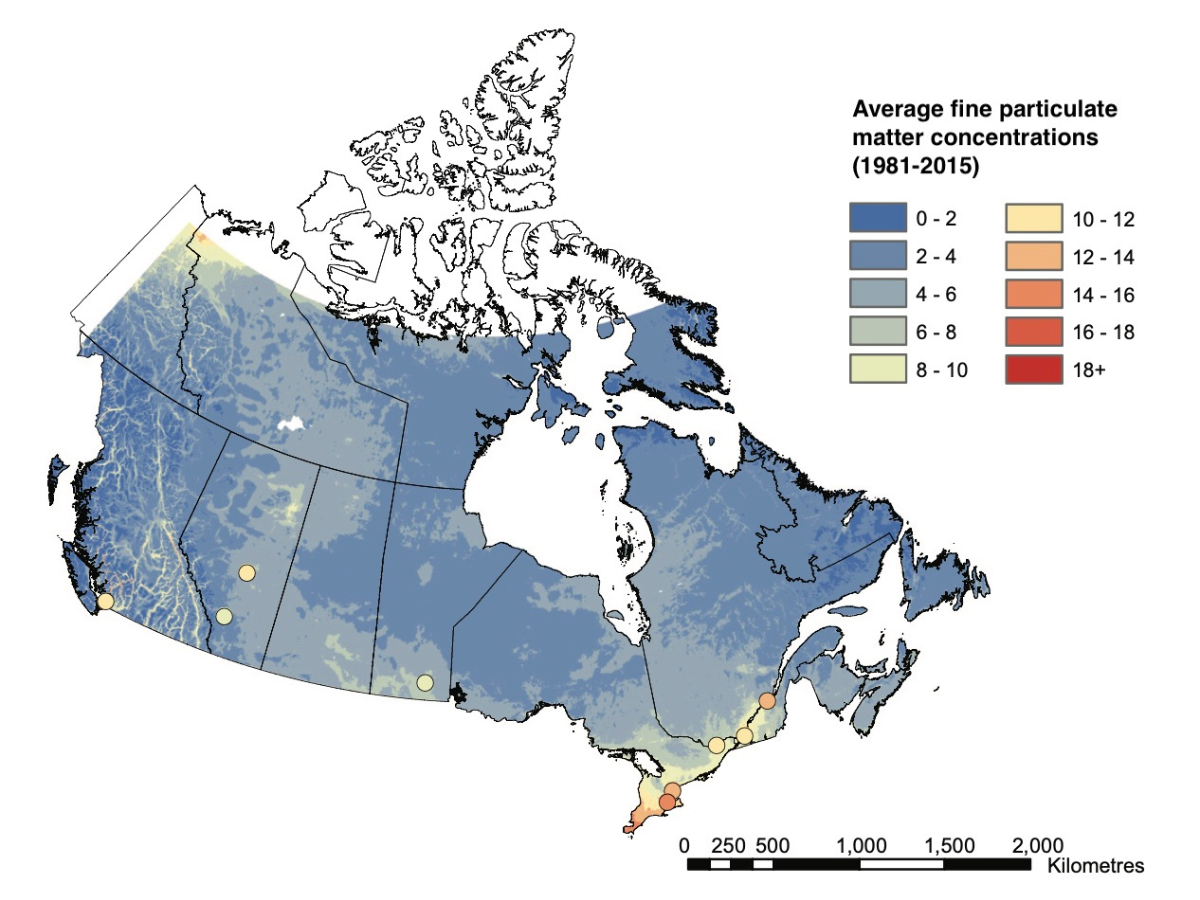 UBC researchers created a heat map showing where in Canada pollution levels were highest between 1981 and 2015 (Source: Dr. Michael Brauer)

“This is a signal to regulatory bodies here in Canada and around the world to take a renewed look at air quality standards and what levels are considered acceptable based on the latest evidence,” says Dr. Brauer.

The new study from Dr. Brauer and his team is the final in a set of three studies funded by HEI to explore health effects from air pollution exposure at levels below government recommended standards. The other two reports were conducted in Europe, released in September 2021, and in the United States, released in January 2022. All three studies were funded through HEI’s program to investigate the health effects of long-term exposures to low levels of air pollution in very large populations.