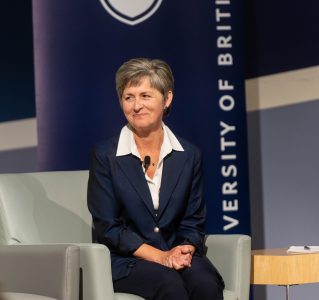 “Women’s voices need to be heard around the decision-making table – yes, because it is 2019 – but also because women bring a unique perspective,” said the Honourable Ginette Petitpas Taylor, Minister of Health, at the announcement on June 5, 2019.

Dr. Shoveller, a professor in the faculty of medicine’s school of population and public health at UBC, and research director of the BC Centre on Substance Use, spoke about the impact of CIHR.

“CIHR’s work is dedicated to making a difference in the health care system,” she said. “A big part of that is listening to the public.”

“CIHR’s work is dedicated to making a difference in the health care system,” she said. “A big part of that is listening to the public.” 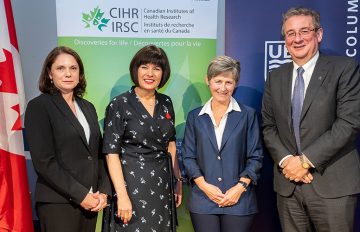 Shoveller has contributed to health sciences research with more than 200 publications. Her research on addictions, gender-based violence, sexually transmitted blood-borne infections and adolescent health is widely cited. She has also supervised the training of more than 70 doctoral and master’s students, as well as post-doctoral fellows from 12 countries. Shoveller has held numerous scholarly awards, including a CIHR/Public Health Agency of Canada Applied Public Health Chair and a Senior Scholar Award from the Michael Smith Foundation for Health Research. She has served CIHR in the past and in 2015, Shoveller was inducted into the Canadian Academy of Health Sciences.

Also included in the announcement was Dr. Brianne Kent, appointed to a three-year term as a member of CIHR’s Governing Council.

Kent is a postdoctoral fellow at UBC and a research fellow at the division of sleep and circadian disorders at Brigham and Women’s Hospital and Harvard Medical School. She studies Alzheimer’s disease and specifically how disrupted circadian rhythms and sleep contribute to the memory loss associated with the disease.