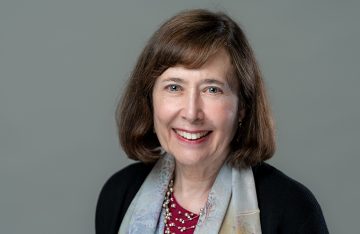 Dr. Connie Eaves, a professor in UBC’s department of medical genetics and the School of Biomedical Engineering, has been elected to the US National Academy of Medicine (NAM) in recognition of her transformational contributions to the field of stem cell research.

Election to NAM is considered one of the highest honours in health and medicine and recognizes individuals who have demonstrated outstanding professional achievement and commitment to service. Dr. Eaves was among 100 new members of the Academy announced on October 17, 2022.

“This extraordinary class of new members is comprised of exceptional scholars and leaders who have been at the forefront of responding to serious public health challenges, combatting social inequities, and achieving innovative discoveries,” said Victor J. Dzau, president of NAM. “Their expertise will be vital to informing the future of health and medicine for the benefit of us all.”

Dr. Eaves, who co-founded and is now a distinguished research scientist at BC Cancer’s Terry Fox Laboratory, was elected to NAM for her profound impacts on our knowledge of hematopoietic and mammary stem cells in both murine and human systems. Her focus on single cell stem cell analyses is widely regarded as seminal, leading to improved purification and detailed characterization of what makes a stem cell a stem cell. Dr. Eaves is also an associate member of UBC’s department of medicine and the department of pathology and laboratory medicine.

Spanning five decades, Dr. Eaves’ work has advanced treatments for leukemia and breast cancers, and her pioneering research methodologies have become gold standards with significant applications worldwide. Throughout her career Dr. Eaves has demonstrated exceptional national and international leadership and has trained more than 100 scientists globally.

Dr. Eaves is a Fellow of the Royal Societies in the UK, Canada and Edinburgh and an inductee to the Canadian Medical Hall of Fame. She was appointed to the Order of Canada in 2021 and received the 2021 Award for Outstanding Achievements in Cancer Research from the Canadian Cancer Research Alliance.

Dr. Eaves was named a recipient of the 2019 Canada Gairdner Wightman Award and one of Chatelaine’s Women of the Year, and has received many other prestigious awards including the Noble and Chew-Wei Prizes for Cancer Research, the International CML Foundation Rowley Prize, the American Society of Hematology’s Stratton Lifetime Achievement and E. Donnall Thomas Awards, and the Stem Cell Network’s Till & McCulloch Lifetime Achievement Award.

Learn more about the new members elected to the National Academy of Medicine.