Over a decade in the making, EPI-506 is a synthetic variant of a pollutant found by Dr. Andersen’s team in a marine sponge off the coast of Papua New Guinea.

A Phase I multi-center clinical trial, sponsored by ESSA Pharma Inc., opens today at the BCCA and other sites in the U.S. to determine the drug’s safety, tolerability and anti-tumour activity. Kim Chi, an Associate Professor in the Division of Medical Oncology, will run the Canadian trial. 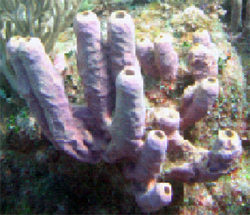 The drug was based on a compound found in this sea sponge.

The second phase of the trial, to determine its ability to control tumour growth, is expected to be complete by the end of 2017.

Over 3,700 men in British Columbia will be diagnosed with prostate cancer this year. Metastatic castrate resistant prostate cancer (m-CRPC) is the lethal form of the disease and is resistant to most treatments.

Dr. Sadar’s work was supported by $2.6 million from the BC Cancer Foundation, as well as the U.S. National Cancer Institute, the U.S. Department of Defense Prostate Cancer Research Program and the Canadian Institutes of Health Research. Dr. Andersen received grants from the Canadian Cancer Society.