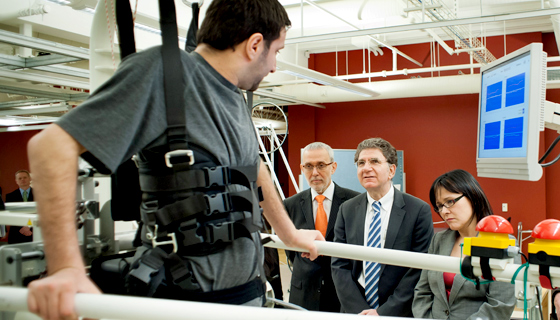 The main cause of death in people with spinal cord injury (SCI) is cardiovascular disease. They develop it at younger ages and at greater rates than the able-bodied population.

Now, a team led by Andrei Krassioukov – a Professor in the Division of Physical Medicine and Rehabilitation, an investigator at ICORD, and a physician at GF Strong Rehabilitation Centre – is embarking on an effort to improve cardiovascular health among people with SCI, and to improve the care they receive.

Thanks to a $1.9-million grant from the Canadian Institutes of Health Research, Dr. Krassioukov and his 20-person team will compare two different types of exercise for people with SCI: using arm cycle machines (the standard approach in rehabilitation clinics) vs. body-weight supported treadmill training, which is rarely used with people with extensive paralysis.

The team will analyze the impact of both forms of exercise by measuring central arterial stiffness, as well as other risk factors for cardiovascular disease.

Dr. Krassioukov’s project also will examine how to better manage one of the more common cardiovascular abnormalities among people with SCI – autonomic dysreflexia (AD). Characterized by episodes of high blood pressure, it can result in a heart attack, cerebral damage or death. But emergency personnel are often uninformed about the optimal treatment for someone undergoing AD.

Dr. Krassioukov’s team will examine the treatment of AD at four hospitals, and then re-examine it after emergency staff have been trained in the proper care of individuals with AD. The researchers estimate that proper management of the condition could reduce annual health care spending by $70 million.

“We’ve known for a long time that to have a healthy heart, you need to exercise,” Minister Aglukkaq said. “However, we still don’t know if people with spinal cord injuries respond differently to exercise than able-bodied people… The goal is to develope effective exercise programs that could have an impact on a person’s overall health.”

“Twenty-years ago, I applied for my first grant to study the effect of spinal cord injury on the cardiovascular system, but it was widely believed that people with SCI didn’t need to worry about cardiovascular disease, and that the research community should focus on curing paralysis,” Dr. Krassioukov says. “While that is still the end goal, we now know how severe and life-threatening cardiovascular issues can be. With this grant we will study different types of exercise interventions as well as translating findings in such a way that we can educate health care providers on the specific cardiovascular problems that are associated with SCI.”

Howard Feldman, the Faculty’s Executive Associate Dean, Research, described the announcement as “heartwarming” because he has watched Dr. Krassioukov from his days as a resident “grow to become a world leader in his area of research.”

Dr. Feldman lauded the investigation for focusing on a “patient-centred problem.” “We want the research to influence patient outcomes,” he said. “We don’t want to do research for the sake of research. We really want to see that it comes back to patients’ lives.”