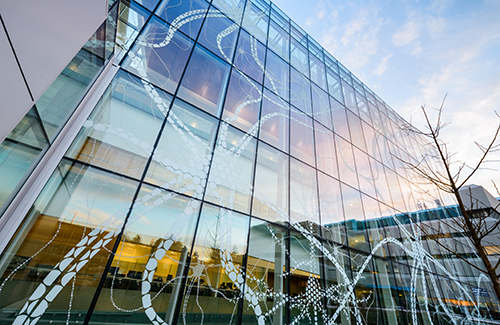 It’s no mere architectural conceit. Those lines, along with circular nuclei from which they emanate, are a representation of neurons – the brain cells that thrive on their ability to connect with other neurons. Every thought, sensation, reaction and bodily function depends on that connectedness.

The larger-than-life imagery reflects the building’s purpose – this is a place dedicated to brain health. But it also serves as metaphor for the ambitions of the people who work inside – this will be a place where research connects with care.

It is the home of the Djavad Mowafaghian Centre for Brain Health, the largest integrated brain centre in Canada. When it officially opened Feb. 27, the building united under one roof scientific and clinical expertise in neuroscience, psychiatry and neurology.

Named for Vancouver philanthropist Djavad Mowafaghian in honour of his $15-million donation to UBC, the centre is a partnership between UBC and Vancouver Coastal Health. It houses clinics for Multiple Sclerosis, Alzheimer’s disease, Parkinson’s disease, and mood disorders. It provides space for scientists studying myriad questions, including the genetic underpinnings of neurodegenerative diseases, the brain’s recovery from stroke, and the impact of exercise in forestalling cognitive decline. And it serves as an educational and training venue for hundreds of medical students and graduate students, who will benefit from the proximity of research to patient care, the interdisciplinary networking, and larger exam rooms to accommodate instructional activity. 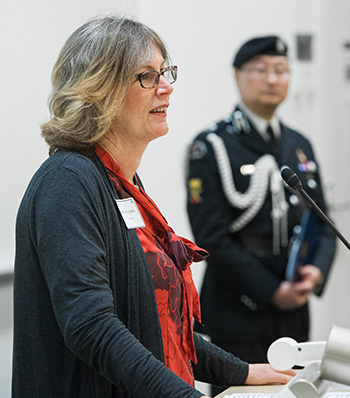 Marilyn Lenzen speaking at the opening ceremony of the Djavad Mowafaghian Centre for Brain Health.

“For individuals like me with brain-related conditions, this building exudes hope,” said Marilyn Lenzen, a North Vancouver resident, MS patient and participant in UBC-VCH research, who was one of several speakers at the opening ceremony. “The atmosphere here is one of restlessness, of not being content with accepted, conventional treatments. I am proud to be part of that process of discovery, and gratified to see that even more patients will now be able to do the same.”

Construction of the $70-million building was supported by the B.C. government ($25 million), Industry Canada ($10 million), Canada Foundation for Innovation and matching funds from the BC Knowledge Development Fund ($6.48 million), as well as by $13.5 million in donations from Charles Fipke, the Townsend family, the Borgland family, and Rudy North. Construction began in October 2011.

Located directly in front of UBC Hospital, the 13,709 square-metre centre was designed by Stantec with patients in mind, including short walking distances, simplified way-finding and numerous places where patients can rest or pause.

“It’s especially meaningful for me to be here for this opening today, as I will head home after this event to attend the funeral of a family member, a retired doctor,  who died this past week after struggling with Alzheimer’s disease,” said the Honourable Judith Guichon, the Lieutenant Governor of British Columbia. “We know that there’s a lot of hard work, and that answers will take time, patience and long hours. But little by little, pieces will be discovered, the keys to unlock the mystery will be found, and we will be able to improve the outcomes for so many.”

Brain dysfunction affects one in three Canadians from early childhood to old age, costing more than $30 billion annually. It’s expected to overtake heart disease and cancer as the leading cause of death and disability in Canada by 2020.

How exercise can boost brain power

Recharging your brain, one neuron at a time

Head games: How the mind works when gambling

A major clinical feature at the DMCBH is an expanded infusion room. Under the supervision of doctors and nurses, MS and Alzheimer’s disease patients routinely receive intravenous medication infusions that may last five to eight hours. The new infusion room, with natural light, WiFi and space for family and visitors, represents a significant improvement for patient care. The facility also hosts the largest cohort of a national MS drug treatment trial, led by Anthony Traboulsee, an Associate Professor of Neurology.

The centre will include a brain tissue and DNA bank, a state-of-the-art repository that preserves donated patient material which could be used to identify genetic risk factors for diseases.

The centre is being steered for its first few months by a trio of Co-Directors from the Faculty of Medicine:

— Max Cynader, a Professor in the Department of Opthalmology and Director of the Brain Research Centre, who conceived and advocated for creation of an integrated brain health centre. Having seen his vision realized, he retires in July.

— Jon Stoessl, Professor and Head of the Division of Neurology and Director of the Pacific Parkinson’s Research Centre, whose research involves using positron emission tomography to study Parkinson’s disease and related disorders, the basis for complications arising from treatment, and the mechanisms of the placebo effect.

— Brian MacVicar, a Professor in the Department of Psychiatry, one of the world’s pioneers in describing the activity of brain cells – not just neurons, but glial cells, thus contributing to a new appreciation for their essential roles in brain maintenance, protection and repair. 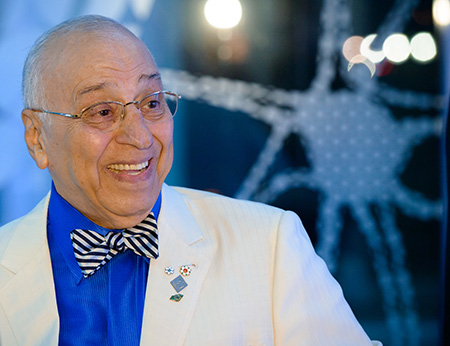 The centre’s namesake, Djavad Mowafaghian, was born in Tehran and settled in Vancouver in 1987. After establishing a company that developed and managed several office buildings, he created and funded the Djavad Mowafaghian Foundation to improve the lives of children through health and education.

In his remarks at the opening ceremony, Mowafaghian drew upon the words of the 13th century Iranian philosopher and poet Rumi, who wrote that a person can be continually reborn by new ideas.

“It is my hope that scientists working in this centre will be reborn every day — reborn with a new idea — so that thousands of suffering people who enter through the doors of the brain centre with brain disorders, pain, and tears in their eyes can later exit through the discharge doors with shining, smiling faces, hearts and mouths full of gratitude, and arms and legs swinging joyfully and pain free,” he said. “If UBC accepts me as a volunteer, it would be my great honour to be stationed at the discharge door of the brain centre, and to give each cured patient who leaves a long-stemmed rose and hug. The day I am able to do so will be one of the best and most rewarding days of my life.”