An unexpected target — and weapon — for one of the deadliest cancers 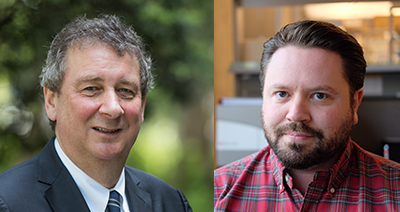 Faculty of Medicine scientists have found that a drug currently being tested for autoimmune disorders of the blood might also hold promise for treating esophageal cancer.

Concern is growing worldwide about esophageal cancer due to its abysmal survival rates, with only 14 per cent of Canadian patients alive five years after diagnosis. It’s one of the few cancers that is becoming more common.

Shane Duggan, a postdoctoral fellow in the Division of Gastroenterology, and Dermot Kelleher, Dean of the Faculty of Medicine, found that fostamatinib reduced the growth rate of esophageal adenocarcinoma (EA) in mice by at least 70 per cent compared to a control group.

Their discovery, published Jan. 21 in Cellular and Molecular Gastroenterology and Hepatology, resulted from their strategy of conducting an unbiased search for possible treatment targets for esophageal cancer, the sixth leading cause of cancer-related mortality and the second-deadliest cancer type.

Esophageal cancer’s deadliness stems in part from the fact that it’s often diagnosed at an advanced stage, when it’s likely to have metastasized. It also has a frustratingly diverse genetic profile, so unlike some other cancers, scientists haven’t found a prominent target for drug therapy.

Dr. Duggan and Dr. Kelleher conducted a screen of about 6,000 genes found in all cells that are known or emerging drug targets in a variety of diseases. They found about 300 druggable genes specific to esophageal cancer, and using biopsies of esophageal cancer from British Columbia, the U.K. and Ireland, narrowed that list to three primary candidates. They noticed a surprising trend: The genes were more associated with immune cells than with the epithelial cells of the esophagus.

Esophageal cancer is often preceded by a condition called Barrett’s esophagus, which results from gastroesophageal reflux disease (GERD). The reflux causes the inflammation and induces the esophageal tissue to transform into intestinal-like tissue.

The immune cells unleashed by GERD may never fully depart from the esophagus, causing low-level inflammation that continues undetected and without symptoms, Dr. Duggan says. The transformed esophageal epithelial cells, after prolonged exposure to inflammation, seem to produce and become driven by a protein called spleen tyrosine kinase (SYK).

“That is what is driving the growth of esophageal cancer cells,” Dr. Duggan says. “The epithelial cancer cells produce — and become dependent on — inflammatory signals to maintain their abnormal growth rate.”

“If you looked at the results of our study blindly, you might assume you are looking at a form of lymphoma rather than an epithelial tumour,” said Dr. Kelleher, a gastroenterologist and biomedical researcher who has explored the immune response to many of the leading causes of gastrointestinal disorders.

Dr. Duggan and Dr. Kelleher then turned their attention to fostamatinib, an SYK inhibitor developed by San Francisco-based Rigel Pharmaceuticals Inc., which has shown promise in immune and lymphoproliferative disorders.

“We found several drug candidates, but fostamatinib stood out because it’s further along in clinical trials and approvals,” Dr. Duggan said. “This was the most prominent, low-hanging fruit.” He added that clinical trials have already demonstrated the drug’s safety in other conditions.

“Our arsenal of drugs to treat esophageal cancer is very limited, compared to other, more common cancers,” Dr. Kelleher added. “The discovery of SYK’s role in cancer growth, as well as other factors, offers the possibility of new weapons that are far more precise and tailored to the particular traits of esophageal cancer than standard chemotherapy agents.”

The research was supported by a private gift from Michael Chan, in memory of his late wife Pauline Chan of Vancouver.