Alzheimer’s disease, the leading cause of dementia, has long been assumed to originate in the brain. But research from the University of British Columbia and Chinese scientists indicates that it could be triggered by breakdowns elsewhere in the body.

The findings, published today in Molecular Psychiatry, offer hope that future drug therapies might be able to stop or slow the disease without acting directly on the brain, which is a complex, sensitive and often hard-to-reach target. Instead, such drugs could target the kidney or liver, ridding the blood of a toxic protein before it ever reaches the brain.

The scientists demonstrated this cancer-like mobility through a technique called parabiosis: Surgically attaching two specimens together so they share the same blood supply for several months. 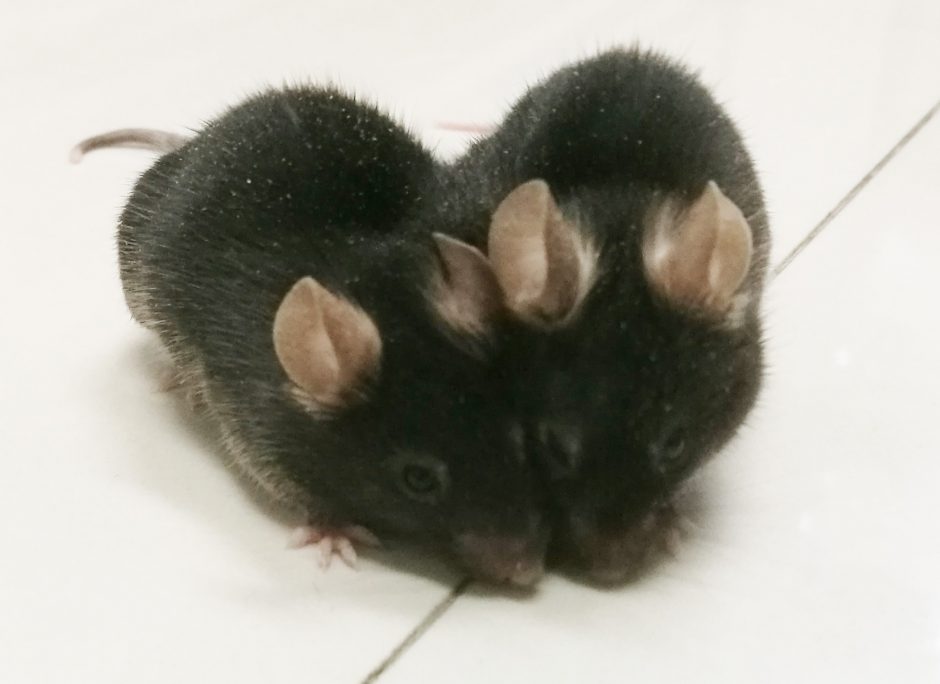 A pair of surgically-joined mice.

Normal mice that had been joined to genetically modified partners for a year “contracted” Alzheimer’s disease. Dr. Song says the amyloid-beta traveled from the genetically-modified mice to the brains of their normal partners, where it accumulated and began to inflict damage.

Not only did the normal mice develop plaques, but also a pathology similar to “tangles” – twisted protein strands that form inside brain cells, disrupting their function and eventually killing them from the inside-out. Other signs of Alzheimer’s-like damage included brain cell degeneration, inflammation and microbleeds. In addition, the ability to transmit electrical signals involved in learning and memory – a sign of a healthy brain – was impaired, even in mice that had been joined for just four months.

Besides the brain, amyloid-beta is produced in blood platelets, blood vessels and muscles, and its precursor protein is found in several other organs. But until these experiments, it was unclear if amyloid-beta from outside the brain could contribute to Alzheimer’s disease. This study, Dr. Song says, shows it can.

“The blood-brain barrier weakens as we age,” says Dr. Song, a Canada Research Chair in Alzheimer’s Disease and the Jack Brown and Family Professor. “That might allow more amyloid beta to infiltrate the brain, supplementing what is produced by the brain itself and accelerating the deterioration.”

Dr. Song, head of UBC’s Townsend Family Laboratories, envisions a drug that would bind to amyloid-beta throughout the body, tagging it biochemically in such a way that the liver or kidneys could clear it.

“Alzheimer’s disease is clearly a disease of the brain, but we need to pay attention to the whole body to understand where it comes from, and how to stop it,” he says.