A Japanese art leads to a futuristic innovation – brain “organoids” 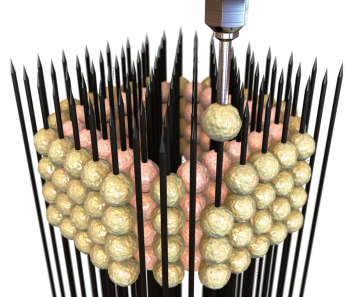 An illustration of the Kenzan technique for growing organoids. Image courtesy of Cyfuse.

The ancient Japanese art of flower arranging was the inspiration for a ground-breaking new technique for creating tiny “artificial brains” that could be used to develop personalized cancer treatments.

The organoids – clusters of thousands of human brain cells – cannot perform a brain’s basic functions, much less generate thought. But they provide a far more authentic model – the first of its kind – for studying how brain tumours grow, and how they can be stopped.

Christian Naus, a Professor in the Department of Cellular and Physiological Science, who conceived the project with a Japanese company that specializes in bioprinting, shared details about the technique at November’s annual Society for Neuroscience conference in San Diego. The work was selected by the conference organizers as one of its “hot topics.”

Dr. Naus, the former Director of the Life Sciences Institute and Canada Research Chair in Gap Junctions in Neurological Disorders, studies glioblastoma, a particularly aggressive brain cancer that usually takes root deep inside the brain, and easily spreads. The standard care is surgery, followed by radiation and/or chemotherapy, but gliomas almost always return because a few malignant cells manage to leave the tumour and invade surrounding brain tissue. From the time of diagnosis, median survival is one year. 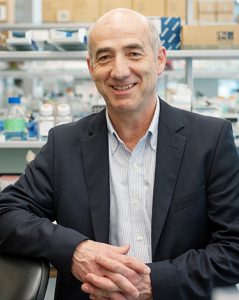 Dr. Naus and Research Associate Wun Chey Sin study the behavior of glioblastomas the way most scientists study cancers – either by growing cells in plastic dishes or growing them in mice. But both of those are, in many ways, far removed from the conditions of a living, human brain.

The idea for creating a more authentic model originated when Dr. Naus came across representatives of the Japanese biotechnology company Cyfuse at a cell biology conference. Cyfuse has developed a particular technique for printing human tissues, based on a device, called a kenzan, used in ikebana (flower arranging) – a heavy plate with brass needles sticking up, upon which the stems of flowers are affixed.

Cyfuse’s bioprinting technique uses a much smaller plate arrayed with microneedles. Its proprietary RegenovaTM bioprinter can robotically place a cluster of cells, or spheroid, on each needle, allowing them to merge and secrete their own extra-cellular structural material into three-dimensional space, as opposed to the flat, artificial confines of a plastic dish.

Working with Dr. Naus, Kaori Harada of Cyfuse skewered spheroids of human neural stem cells, which multiply and differentiate into brain tissue. As the spheroids grew, they merged with one another into larger structures – the organoids, about 2 millimetres to 3 millimetres in diameter. Although the organoids lack blood vessels, they are small enough to allow oxygen and nutrients to permeate the tissue.

“The cells make their own environment,” says Dr. Naus, who is also a member of the Djavad Mowafaghian Centre for Brain Health. “We’re not doing anything except printing them, and then they self-assemble.”

Then the cancerous glioma cells were implanted inside these organoids. Dr. Naus found that the gliomas, as he hoped, spread into the surrounding normal cells. 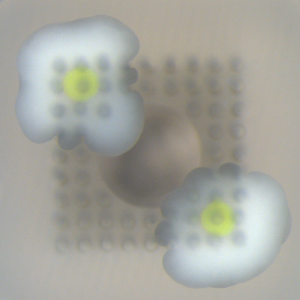 An overhead view of two organoids on a needle array, each with a glioma (in green) inside. Image courtesy of Cyfuse.

“This puts the tumour within the context of a brain, instead of a flat plastic dish,” Dr. Naus says. “When cells grow in three dimensions instead of two, adhering only to each other and not to plastic, an entirely different set of genes are activated.”

Having shown that the tumour invades the surrounding tissue, Dr. Naus envisions that such a technique can be used with a patient’s own cells – both their normal brain cells and their cancerous cells – to grow a personalized organoid with a glioma at its core, and then test a variety of possible drugs or combinations of treatment to see if any of them stop the cancer from growing and invading.

“With this method, we can easily and authentically replicate a patient’s brain, or at least some of the conditions under which a tumour grows in that brain,” Dr. Naus says. “Then we could feasibly test hundreds of different chemical combinations on that patient’s cells to identify a drug combination that shows the most promising result, offering a personalized therapy for brain cancer patients.”