Once Amir was diagnosed with bipolar disorder, he was eager to understand this brain disorder that causes unusual shifts in mood, energy and activity levels. He didn’t need to look any further than Vancouver to find Dr. Erin Michalak, network leader of CREST.BD, a team that studies psychosocial issues in bipolar disorder with youth ages 15 to 22.

Dr. Michalak, a Djavad Mowafaghian Centre for Brain Health researcher, quickly recognized Amir’s talents and involved him in making a video about how people with bipolar disorder manage school. Before long, he was interviewing scientists at the largest annual bipolar conference and posting what he learned from them on social media.

“The best part for me was being around other people who have bipolar disorder and are doing well,” says Amir, who studies cognitive systems in the UBC Faculty of Science. “It sounds simple, but when you’re first diagnosed and learn about it, it’s not positive. But all of the people I’ve met at CREST have given me hope and shown me not to limit myself in what I can do.” 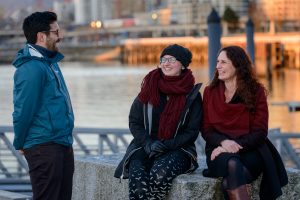 Dr. Michalak’s goal is to help people with bipolar disorder improve their own health and wellness, and she makes it happen by engaging them in research and knowledge exchange.

“One of the secrets to success is adapting the way we work together according to where each person is at and where they’re going,” says Dr. Michalak.

Natasha met Dr. Michalak when she was an undergraduate student in psychology at UBC. She got involved with CREST.BD by posting research results for a wide audience on social media and went on to develop the project’s blog (www.crestbd.ca/blog).

“If I remember how it happened, Erin asked me if I wanted to make a blog, I said yes, and we did it,” says Natasha with a laugh. “It was a fantastic experience to connect with so many people with different backgrounds—researchers, health care providers, supporters, and people with lived experience—and be able to share knowledge.”