256 Channels of Hope for Families with Schizophrenia 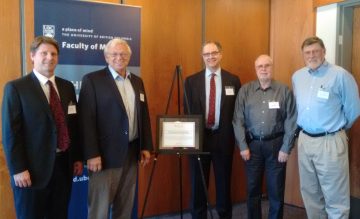 Most people enjoy the sound of laughter, but not Wes Pahl. When Wes hears laughter, he is tormented by the thought that people are laughing at him or about him. He suffers from schizophrenia, a debilitating disease that causes delusions, hallucinations and disorganized thinking—a disease that causes people like Wes to live in conflict with the world around them.

Two of Wes’s three brothers also live with schizophrenia. As each sibling was diagnosed with the disease over a two-year period, their father and mother, Gerhart and Penny Pahl, faced overwhelming challenges. For the first time in their lives, the Pahls were involved with the criminal justice system and forced to navigate a complicated medical system, all while living as a family with an incurable illness.

Like many people dealing with schizophrenia, Gerhart turned to the BC Schizophrenia Society (BCSS) to help his family manage their new challenges. In 2005, he became Director of the BCSS and eventually Chair of the Society’s Foundation. Through his involvement with the BCSS and with other families affected by the illness, Gerhart became convinced that mental health research is the greatest hope for identifying more effective treatments and ultimately a cure for this devastating disease.

Gift of discovery and hope 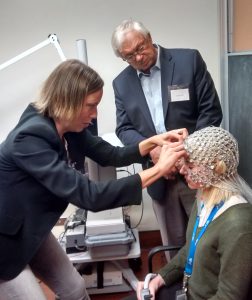 Dr. Christine Tipper, Assistant Professor of Psychiatry, fits the EEG onto a psychiatry student for a demonstration.

This hope led the BCSS Foundation to donate $75,000 to the UBC Faculty of Medicine to enable the Institute of Mental Health and the Department of Psychiatry to purchase a modern electroencephalograph (EEG) to advance schizophrenia research. The EEG is a cutting-edge piece of equipment resembling a netted swim cap peppered with 256 electrodes—almost 200 more than traditional versions of the technology. Although these electrodes are small, they have the powerful ability to directly measure neurons firing across the brain.

This gift is the most recent pledge of support in a three-decade long partnership between the BCSS and the UBC Faculty of Medicine, including the establishment of the Jack Bell Chair in Schizophrenia, which has catalyzed important discoveries in schizophrenia, from basic science to clinical treatments.

Dr. Todd Woodward, Associate Professor of Psychiatry, is one of the researchers who will benefit from the EEG equipment. Dr. Woodward’s research focuses on identifying ways to augment the pharmaceutical treatment and management of schizophrenia – a critical area of study, as approximately 30% of people with schizophrenia do not respond well to medication alone and it is not understood why some benefit while others do not.

Dr. Woodward, who has been supported by the BCSS since 1999, was one of the pioneers of metacognitive training – an approach that teaches people with psychosis to recognize and correct misleading thoughts – which has been shown to reduce the severity of schizophrenia symptoms including delusions. This intervention aims to therapeutically rewire certain areas of the brain to help patients manage their specific symptoms.

This EEG technology will enable Dr. Woodward to more effectively measure changes in the neural pathways that cause symptoms of psychosis, which will inform the development of new methods to help people with schizophrenia and other forms of mental illness rewire or correct these brain pathways.

“This equipment is a major advance,” says Dr. Woodward. “We can track the timing and anatomical signature of a thought or cognitive process better than ever before. My hope is that our findings can be turned into clinical treatments that help guide diseased minds to follow healthier brain patterns. We may be only a year or two away.”

The 256-channel EEG has already been used to measure brain function in more than 90 people across the Lower Mainland, and shows great promise to expand our understanding of the brain in both diseased and healthy states.

In addition to benefiting Woodward’s lab, the EGG will also be used by other UBC schizophrenia and psychosis researchers.

“Our entire schizophrenia research program will benefit greatly from access to the EEG and will help to generate research findings that contribute to our growing knowledge about schizophrenia. These findings will have a direct impact on the people who are struggling with schizophrenia now or in the future,” says Dr. William Honer, Professor and Head of the Department of Psychiatry, Director of the UBC Institute of Mental Health and Jack Bell Chair in Schizophrenia.

Widespread research and treatment advances are exactly what families like the Pahl’s hope to witness. “One day we parents will pass away and it is critical that our children have the tools to permit them to function independently,” explains Gerhart. “Although these tools don’t exist yet, they are being developed through research.”

Moving forward, Dr. Woodward hopes to expand this modern EEG technology to a number of hospitals throughout the Lower Mainland. He emphasizes that the ability to collect data from these hospital sites and unify the way schizophrenia research is conducted could lead to a world-class research effort initiated in BC.