Dr. Webb, the McLeod Professor of Heart Valve Innovation at UBC, has received the 2021 Canadian Cardiovascular Society (CCS) Achievement Award in recognition of his decades of outstanding contributions to cardiovascular science. 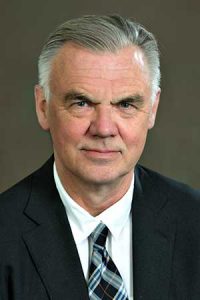 Among his many achievements as a researcher and clinician, Dr. Webb helped pioneer a transcatheter aortic valve implantation procedure that makes heart-valve replacements much less invasive for most patients. It has become the gold standard for procedures of its kind in the developed world.

He has also played an important role as an educator, helping to launch the careers of several generations of cardiologists and cardiovascular researchers in British Columbia and beyond.

“Dr. Webb has won every major clinical and research award in cardiovascular sciences in both North America and Europe,” says Dr. Sean Virani, associate professor of medicine at UBC and co-chair of the CCS Heart Failure Guidelines Panel. “Despite his global profile, John has successfully mentored local and international faculty for over twenty years. He sets the bar for fostering scholarship training, career acceleration, research excellence and leadership.”

Dr. Webb, who also serves as the medical chair of the Transcatheter Heart Valve Program with Cardiac Services B.C. and medical director of the Catheterization Lab at St. Paul’s Hospital, credits his success to a simple love of problem-solving: “When I was in medical school… I just gravitated towards the heart. I liked ‘fixing things’ that could be fixed. The heart is alive; it moves and pumps with mechanical issues you can fix, that ultimately, really help people,” he says.

Looking toward the future, he remains as excited as ever about his work: “The field is constantly changing and improving and it’s important to continually develop different procedures so we can improve the lives of the people we care for. I love doing what I do.”

Adapted from an interview that originally appeared on the Provincial Health Services Authority website. Learn more about the Canadian Cardiovascular Society Achievement Award.