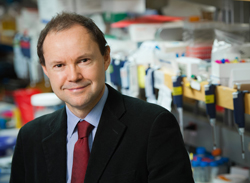 Dr. Huntsman leads a research team that discovered ovarian cancer is not one disease but is actually made up of five subtypes that behave like distinct diseases. His work has provided a road map for clinicians and researchers studying ovarian cancer, Canada’s most fatal gynecologic cancer, and has shed light on practices that could help prevent the disease and change the way in which it is diagnosed and treated.

“This award is a huge honour for me and for the OvCaRe team,” says Dr. Huntsman, also the Director of the Ovarian Cancer Research (OvCaRe) Program of B.C., operated jointly by the BC Cancer Agency and Vancouver General Hospital. “It will encourage us to push harder in our drive to develop the cancer prevention and treatment strategies to beat this disease.”

The Karen Campbell National Award for Research Excellence recognizes excellence in research that has had a significant impact on the understanding, future research and treatment of ovarian cancer.