Katrina Genuis, Island Medical Program Class of 2015, worked at the BC Cancer Agency Deeley Research Centre in Victoria in the summer of 2012. She discusses her project and what she learned from the experience.

Can you describe your project? 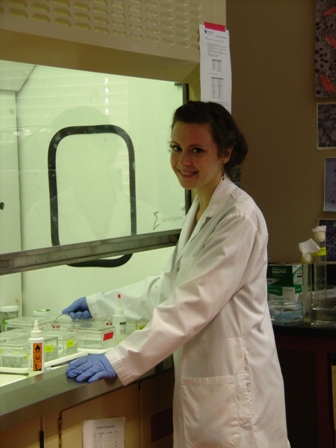 Ovarian cancer is the most lethal gynaecological cancer.  After initial chemotherapy treatment serous ovarian cancer, the most deadly ovarian cancer subtype, has a 5-year survival rate as low as 20- 30% due to persistent cancer recurrence. My summer project at the BC Cancer Agency’s Deeley Research Center (DRC) in Victoria focused on the body’s immune response to serous ovarian cancer. Previous research at the DRC has demonstrated that serous ovarian cancer patients with tumour-infiltrating Killer T white blood cells have higher survival rates. In fact, researchers at the Centre discovered that by transferring a targeted Killer T Cells line into mice, ovarian cancer tumours completely regressed within 10 days. Despite these intriguing results, much is still unknown about the action of Killer T cells within tumours.

My project sought to explore these Killer T cells by answering three questions:

Why were you interested in working on this project?

One of the central pillars of being a physician is practicing evidence-based medicine. This evidence basis stems from the ever-expanding world of medical research, an area which I had very little knowledge of prior to this summer. I believe that it is extremely important for physicians to learn and be confident about the prognosis they make and treatments they prescribe. How else to learn where the science comes from, than to directly immerse myself in research?  This project was a perfect fit for me, allowing me to both experience the world of research and to contribute to an area of personal and academic interest- cancer research.

What is one important thing that you learned? How will this research experience help you in your medical studies in the future?

Being a part of a research community has taught me so much about the importance of a cohesive and supportive team in the process of scientific discovery. Whether creatively developing new ideas at a small meeting with just a few researchers or discussing recent publications alongside the entire research team at lunchtime presentations, I have been struck by the way that a diverse team is so much more effective than just a few individuals. This is incredibly relevant to my future in medicine, a field where I will be learning from and working together with medical and research colleagues on a daily basis.  I have also learned a significant amount regarding research statistics and methods of ensuring that data and results are valid. When I now read about new treatment guidelines or medical discoveries, I have a much better idea of where this knowledge comes from and how to critically read the medical papers which publish these new discoveries. 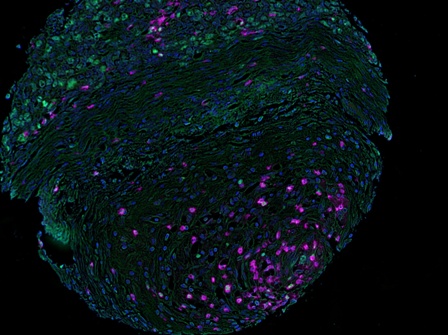 I am extraordinarily grateful to my supervisor, Dr. Brad Nelson, and the entire DRC for their teaching and guidance this summer. I have been incredibly encouraged in spending my summer with so many brilliant and motivated researchers who devote their time to studying the workings of the human body.  I will continue working at DRC on occasion throughout the school year and plan to write up the results from my research for publication in the coming year!

To answer these questions, I first worked in the lab to perform colored antibody stains on microscope slides containing hundred of ovarian tumour tissue samples. This cell staining allowed me to visualize, count, and analyze proliferating Killer T cells in over 200 serous ovarian cancer tumour cores.

In response to my 3 research questions, I discovered that: