The Faculty of Medicine Summer Student Research Program allows students to gain valuable research experience to help them prepare for successful careers in the field of health care.

In the United States, 60,000 women are diagnosed with endometrial cancer each year and 11,000 will die from their disease. Most patients can be treated by surgery alone and discharged to the care of their community physicians, however; a minority of women have cancer that has spread beyond the uterus, or recurrent cancer that comes back aggressively and requires extensive treatment and surveillance. The survival rate for patients with recurrent endometrial cancer is particularly poor and there is currently no way to reliably predict the probability of recurrence, and thus mortality, in endometrial cancer patients (i.e. high-risk versus low-risk). This has led to both under- and over-treatment of these patients. 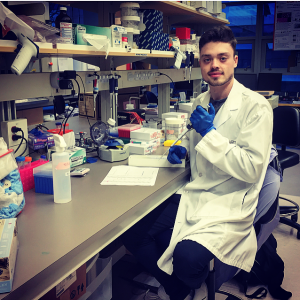 In the summer of 2016, FoM Summer Student Research Program (FoM SSRP) student Jamie Magrill had the opportunity to work with Dr. Jessica McAlpine (Assistant Professor, Department of Obstetrics and Gynecology) at BC’s Ovarian Cancer Research Program. Their project sought to validate a new assay that predicts the risk levels of endometrial cancer patients. In preliminary studies, this assay, known as ProMisE (Proactive Molecular Risk Classifier for Endometrial Cancer), was able to consistently and reliably sort patients into one of four risk groups ranging from low to high risk of endometrial cancer recurrence based on DNA mutation and protein analysis. Building upon previous data from samples in Vancouver, the intention was to validate ProMisE in an independent cohort of 500 patients from Germany. Although this project is still underway, Jamie was able to contribute to its advancement through validating ProMisE’s ability to accurately predict risk level. Specifically his contributions included extracting, analyzing, and sequencing DNA from tumor samples, as well as staining for selected molecular targets via immunohistochemistry.

Jamie’s previous experience in cancer research and interest in genetics sparked his interest in joining this project. Through his FoM SSRP, he hoped to learn new lab techniques and work on a research project where he would be able to see a demonstrable impact on patient care. Working to validate the ProMisE assay allowed him to realize both of these goals. However, what Jamie was most surprised to gain from this opportunity was the experience of connecting with other notable researchers involved with the project, including Dr. Friedrich Kommoss, a visiting professor from Germany. Meeting with and working alongside these dedicated researchers strengthened his interest in performing research and confirmed his desire to pursue a future career in a medicine-related field. Jamie’s FoM SSRP experience also opened up further opportunities for him, including publishing a first-author paper and presenting his project at the 2017 U.S. and Canadian Academy of Pathology’s General Meeting.