This editorial originally appeared in the Times Colonist.

Ever since I was a little girl, I wanted to be a doctor. I can’t remember wanting to be anything else. I remember writing a letter to myself in Grade 7, about the possibility of joining two of my passions — caring for patients and using my brain.

I’m sure some people thought I was crazy or maybe just very naïve. The doctors on TV didn’t look like me. Neither did TV families, which seemed so different from me, my mother, my sister and my two brothers. 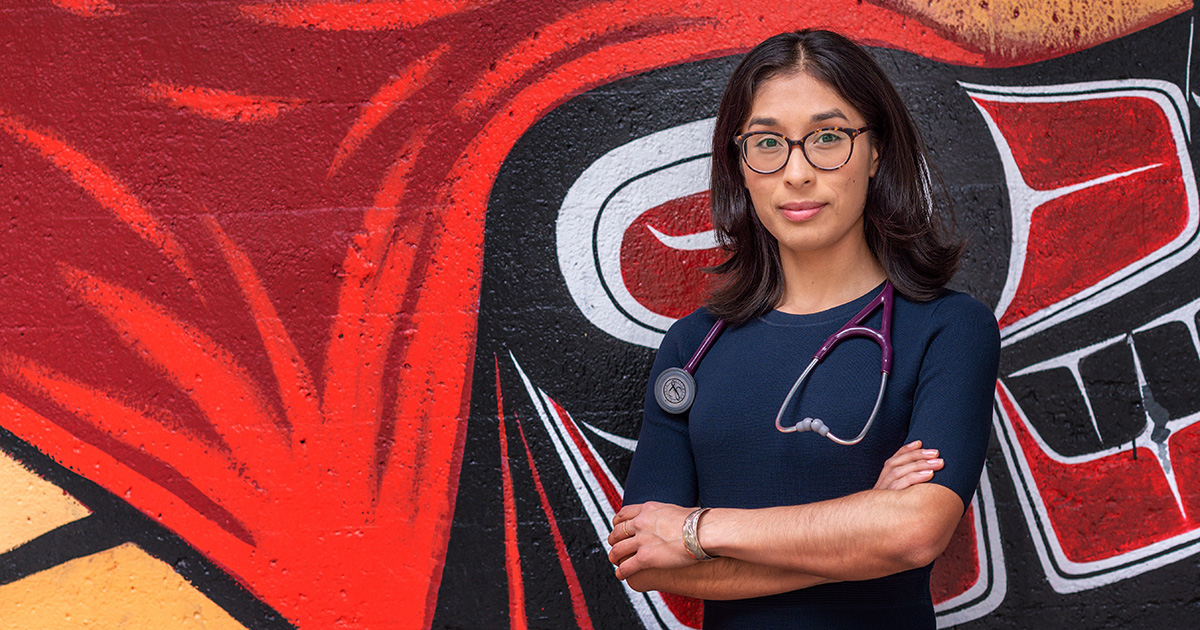 Rebekah Eatmon is a graduate of UBC’s medical undergraduate program and a post-graduate resident specializing in family medicine.

I grew up in Burnaby. My mother is Métis, with family ties to the Red River Settlement. My father is from Lax Kw’alaams, a Tsimshian First Nation community about a 20-hour drive north of Vancouver. We struggled a bit growing up; my mother raised us on her own. But she always taught me to reach for things that seemed far away, through knowledge and education.

When I was in Grade 2, she scraped and saved and bought me a set of children’s encyclopedias. I read the entire set in two weeks.

I did well in school, and I don’t mean to sound arrogant, but I knew I was smart — smarter than the other kids. I loved the pursuit of knowledge and thinking through and solving problems. Of course, I heard the slurs and the stigma — that natives were stupid, that Indians were drunks.

And for a long time, I struggled with accepting my Indigenous background, due in part to the lack of strong role models and the negative connotations surrounding Indigenous Peoples. I often heard from other children’s parents that I was not like the “other natives” because I worked hard and was on track for success.

Many Canadians were not — and are still not — aware of the strength in Indigenous communities. Our people were healthy, using traditional medicines, with flourishing family systems before colonization.

But Canada’s history of colonization and racism toward Indigenous peoples — the reserve system, the history of lack of voting rights, Indian hospitals, residential schools and ongoing funding deficiencies for schools on reserve — led to systemic barriers to health care. The First Nations Health Authority does tremendous work delivering programs and services to bridge the gap, but compared with other British Columbians, First Nations people have shorter life expectancy, poorer health status and higher rates of infant mortality, diabetes and youth suicide.

After graduating from Burnaby South Secondary School, I enrolled at the University of British Columbia and obtained a degree in kinesiology before I was accepted into medical school via UBC’s Indigenous MD Admissions Program, which offers admissions workshops, counselling and peer-mentoring to Indigenous students considering a career in medicine.

Importantly, however, the program does not lower the bar for Indigenous students. It simply shines a light on the bar, revealing to us possibilities that students from other backgrounds already understand.

“Many of my fellow Indigenous graduates are now practising physicians… and strong voices and change-makers for Indigenous communities.”

I’m proud of the UBC program. I’m proud of the 91 Indigenous doctors it has graduated since 2006, including the 11 Indigenous students who will receive their degrees in medicine on May 22. Many of my fellow Indigenous graduates are now practising physicians, both family doctors and specialists, and strong voices and change-makers for Indigenous communities.

I graduated last May (the first member of my family to graduate from university). It has been a busy year. I’m a first-year resident, rotating among four venues — St. Paul’s Hospital (where I was born) and three Indigenous-focused clinics in Vancouver’s Downtown Eastside. It has been a whirlwind, but it has only just begun.

Many Indigenous people are wary of doctors. Yet familiarity begets communication, and understanding improves care. I have family on reserve, so patients don’t need to tell me their whole story for me to understand. Like the program graduates before me, who work in communities up north and cities across the country, I hope to help bridge that gap and improve Indigenous access to health care, which will improve health outcomes for Indigenous people.

For me, that means practising in Vancouver’s Downtown Eastside, which has earned its reputation as one of Canada’s most troubled neighbourhoods. It might not seem as glamorous as a general practice in the suburbs or a top position at Vancouver General Hospital, but it’s where many Indigenous people need health care, and it’s exactly where I want to be. I’m so happy, grateful and honoured to serve Indigenous clients.

Because I believe in the future, in reaching for things that seem far away. For as long as I can remember, I wanted to be a doctor. It was never a guarantee. There are no guarantees in life. But I’ve made it, and, some might say, despite the odds. And as I said before, I’ve only just begun.

Rebekah Eatmon is a graduate of UBC’s medical undergraduate program and a post-graduate resident specializing in family medicine.