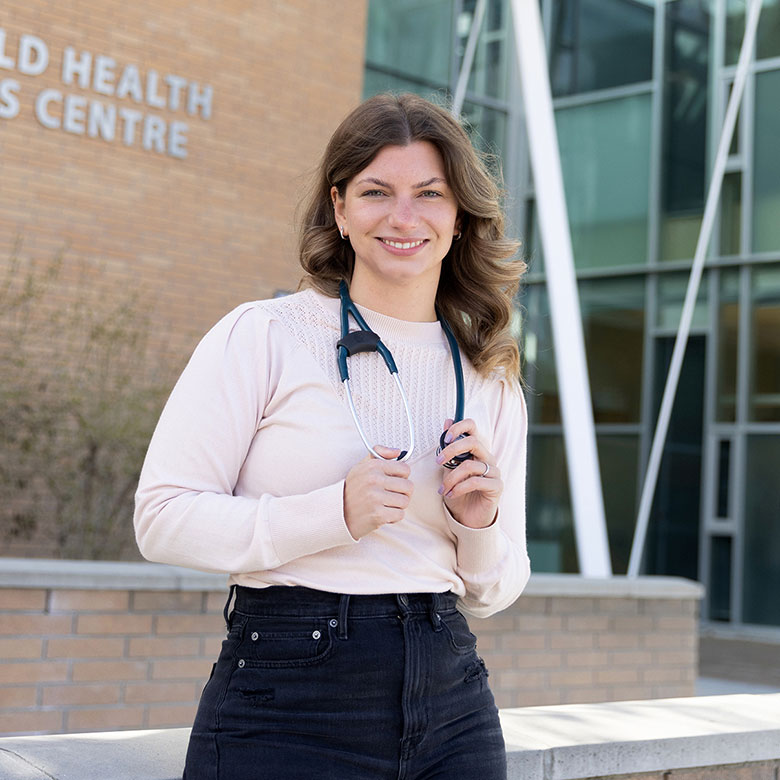 Long before she chose her area of specialization, fourth-year medical student Carlee Clyde knew what kind of doctor she wanted to be.

Growing up, Carlee witnessed the exceptional care her grandfather received from doctors and health care professionals at the Royal Inland Hospital in her hometown of Kamloops. A heart transplant recipient, he lived for nearly three decades after the initial operation — making him one of British Columbia’s longest surviving recipients.

The doctors’ compassion and expertise left a deep impression on Carlee’s grandfather, and on her: “They exemplified the kind of doctor I wanted to be: the kind who listens, who gets to know their patients, who takes care of their community,” she says.

When it came time to apply to medical school, Carlee chose the UBC Faculty of Medicine’s Southern Medical Program (SMP), based at UBC Okanagan in nearby Kelowna. 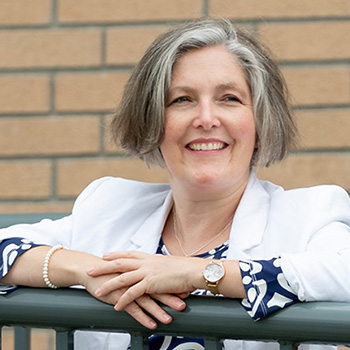 Launched in 2011, the SMP is one of four geographically distinct sites within UBC’s distributed medical education program. With sites in Victoria, Prince George, and Vancouver-Fraser as well as the Interior, the goal of the distributed program is to educate and train more doctors to meet the healthcare needs of communities across the province.

This spring the SMP celebrates its 10th anniversary and a decade of graduating doctors in the Interior.

“Today, more than 90 per cent of learners who complete both their MD and postgraduate medical training at UBC stay in B.C. to practice,” says Dr. Sarah Brears, Regional Associate Dean, Interior. “We have SMP graduates from a wide range of disciplines — including family medicine — now practicing in communities like Oliver, Kamloops, Golden and Williams Lake. The impact on students and the region’s communities has been incredibly positive.”

“Today, more than 90 per cent of learners who complete both their MD and postgraduate medical training at UBC stay in B.C. to practice.”
— Dr. Sarah Brears
Regional Associate Dean, Interior

And, that number continues to grow as the SMP welcomes 32 new medical students each year — creating opportunities for many local and rural learners from diverse backgrounds to train in communities closer to home.

For Carlee, this was an important part of the program’s appeal.

Created with government funding and delivered in partnership with Interior Health, the SMP has more than 1,500 clinical instructors who, at any given time, are teaching and training approximately 130 medical students and more than 90 resident doctors in hospitals and clinics across the region.

In a full-circle moment, Carlee had the opportunity to return to Kamloops and the Royal Inland Hospital for part of her clinical training, where she learned from some of the same doctors who cared for her grandfather — including Dr. Michael Sean Gorman, an SMP clinical instructor in general surgery.

“Dr. Gorman was instrumental to my grandfather’s care and it was a privilege to learn from him, not only because he is an exceptional surgeon with a wide breadth of knowledge, but because he empowers patients in their healthcare decisions,” Carlee says.

An important aspect of the medical program is that it provides students with community-based learning opportunities that prepare future health care professionals to provide culturally-safe care, ultimately leading to more compassionate and community-minded doctors.

“The strength of the SMP is that students’ interaction with faculty, staff and clinical instructors is so much more personal. There are lots of opportunities for guidance and advice about the art of medicine. They come out of the program as well-rounded doctors,” Dr. Gorman says.

The rich learning experience also provides students and residents with the opportunity to form deeper connections with patients and the communities where they train.

SMP alumnus Dr. Taran Main agrees. Now an addictions medicine specialist based in Kelowna, he says that his instructors taught him the importance of active listening and understanding the patient as a whole rather than focusing only on the immediate problem that needs to be fixed.

“It helped me put myself in the patient’s shoes, which is incredibly important in family medicine and addiction medicine,” he says.

The SMP is training the next generation of doctors, making new discoveries, and creating pathways to better health for communities across the Interior Health region.

Originally from nearby Armstrong, Dr. Main also completed his postgraduate medical education training in the SMP. Today he is one of many specialists in B.C.’s southern interior, playing an important role on Kelowna General Hospital’s inpatient addictions medicine team. In his spare time, he works with the Outreach Urban Health Clinic in the city’s downtown core. It’s here that he sees the different aspects of his SMP training come together.

“Our patients face complex health challenges,” Dr. Main says. “We treat their immediate needs, but you can’t do that in isolation. We also advocate for additional resources and help patients make connections within the community.”

That commitment to patient and community also involves training the next generation of health professionals.

Weaving healthcare into the fabric of B.C. communities

Dr. Main recently joined the SMP as a clinical instructor. He sees teaching as a way to give back to the program and further its mission to train excellent, community-minded doctors and strengthen the healthcare system at every level across the province.

“It’s an absolute privilege to share what I’ve learned with the next generation of learners,” he says.

“I am proud to serve the residents of the Interior because this is my home. I have many experiences in common with the people who live here — I hope to be the kind of compassionate, responsive doctor that every patient deserves.”
— Carlee Clyde
Fourth-year medical student

In May, Carlee will join Dr. Main and the more than 215 other doctors who have graduated from the SMP. And like many of them, Carlee plans to practice in B.C., one day setting up a family practice with a sub-specialty in addictions medicine.

Later this year, she’ll begin her family medicine residency back home in Kamloops.

“I am proud to serve the residents of the Interior because this is my home. I have many experiences in common with the people who live here,” she says. “With these shared experiences and my SMP training, I hope to be the kind of compassionate, responsive doctor that every patient deserves.”

“I’m so proud of Carlee and all our grads,” says Dr. Brears. “It’s hugely rewarding to see them serving families and patients in B.C. and reinforces our collective effort to not only train new doctors, but to also inspire them to settle where they train — ultimately here in the Interior to improve access to care.”

We respectfully acknowledge the Syilx Okanagan Nation and their peoples, in whose traditional, ancestral, unceded territory UBC Okanagan and the Southern Medical Program are situated. We also respectfully acknowledge that UBC’s learning sites across the BC Interior are situated within the traditional, ancestral, and unceded territories of the Syilx Okanagan, Secwépemc, Nlaka’pamux, St’át’imc, Ktunaxa, Tŝilhqot’in, and Dãkelh Dené.