Faculty of Medicine
» Home » News » A search to restore sight

A search to restore sight

Jim and Colleen Pallister first noticed something was wrong with their son’s vision when he was 12 years old. During games of badminton, Bryce would lose the birdie in the gym lights, or at hockey practice, he would look around for the puck when it was next to his skate. 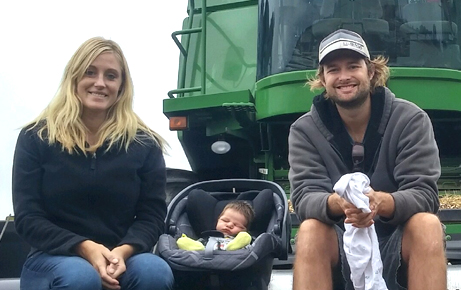 Bryce Pallister with his wife Jenna and son Dawson, born on August 25, 2015.

“In hindsight, it was obvious,” Jim says. “He’s actually had impaired vision for longer than we realized.”

Today, Jim and Colleen often notice Bryce, 27, stubbing his toe and looking down to reach for a handshake. But his vision is good enough for him to operate machinery and take over the business side of the family’s fifth-generation, 16,000 acre grain farm near Portage la Prairie, Manitoba.

After the local ophthalmologist diagnosed Bryce with inherited cone rod dystrophy at age 19, Colleen scoured the internet to learn everything she could about this group of rare eye disorders that slowly damage the retina.

“Until you know the genetic cause, you don’t know where to direct treatment,” says Colleen, a retired nurse. “I looked at all avenues, and there was no treatment for my son.”

Colleen, Jim and Bryce sent samples to labs in Estonia, Germany and Iowa for genetic testing. Two of the labs confirmed the family carries a recessive gene mutation that causes Leber Congenital Amaurosis (LCA), a rare degenerative eye disease that appears at birth or early in life.

Colleen continued her search for information about LCA until she found Cheryl Gregory-Evans, a Professor in the UBC Department of Ophthalmology and Visual Sciences, who had successfully restored normal vision in mice with aniridia, another rare genetic birth defect that causes abnormalities that severely limit vision.

When the Pallisters learned that Dr. Gregory-Evans wanted to test the same drug, Ataluren, to repair the birth defect of LCA, they donated $30,000 toward her research—a gift they renewed the following year based on Dr. Gregory-Evans’ progress.

“Through the course of our careers, we’ve both had a lot to do with research in our work on the farm and in Colleen’s work as a nurse,” Jim says. “You don’t get anywhere without research.”

With the Pallisters’ support, Dr. Gregory-Evans determined that zebrafish with the genetic mutation that causes LCA in humans is a useful model for testing Ataluren. She then applied the treatment to the zebrafish to determine the drug dosage needed to rescue eye function.

Now, the zebrafish will undergo functional tests to assess whether vision is restored – for example, by flashing lights in their eyes to stimulate a response in the retina.

In the future, families like the Pallisters may be able to send a sample to a lab to find out their child’s genetic mutation and whether a therapy will specifically work in their child, giving them the ability to see.

“Our hope is that some treatment will come through that will preserve what’s left of Bryce’s vision,” Colleen says. “Bryce is our hero. He has been so brave and courageous in facing such an ominous diagnosis.”