UBC scientist is paving the way in Alzheimer’s research

January is Alzheimer’s Awareness Month. Cheryl Wellington, a Professor in the Department of Pathology and Laboratory Medicine, has devoted her career to understanding the genetic and environmental risk factors that affect dementia. Her discovery of the role that apolipoprotein (ApoE) – a cholesterol carrier in the brain – plays in Alzheimer’s is internationally recognized and has offered us a better understanding of the disease.

We caught up with Dr. Wellington to talk about her latest projects and how she thinks emerging research will shape the way we diagnose and treat Alzheimer’s 10 years from now.

Tell us about your background and what sparked your interest in Alzheimer’s research.

My background is in basic biology. After obtaining my PhD degree at UBC and doing postdoctoral training at Harvard Medical School and the University of Calgary, I had an amazing opportunity to return to UBC to study Huntington disease and was immediately drawn to the importance of brain diseases such as Alzheimer’s and have never looked back. That was 17 years ago.

What are you working on right now? 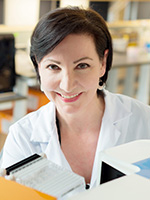 I have three major projects right now. One project aims to understand how Alzheimer’s is affected by metabolic factors. We already know that type II diabetes or high blood pressure can increase the risk for Alzheimer’s and there is evidence that the brain’s blood vessels are somehow involved, but we don’t fully understand this yet. Cerebral blood vessels have major roles in clearing Aβ peptides – which form the amyloid plaques in Alzheimer’s – from the brain, which is why we are focusing on this.

What is very exciting is that we have invented a way to create anatomically and functionally correct cerebral blood vessels in a test tube using entirely human cells. We can now study how “brain” and “body” factors interact to help Aβ get across the blood vessels without triggering inflammation. This may lead to better ways to understand the interactions between brain and body as we age, better ways to test drugs, and perhaps even to patient-specific blood tests that can help us learn about brain function relevant to Alzheimer’s.

A second project studies how traumatic brain injury (TBI) can affect risk for Alzheimer’s. We began this work a few years ago by first developing a way to induce TBI that mimics the biomechanics of human brain injuries and produces pathology that accurately resembles the human response to rapid acceleration and deceleration forces. This was a major advance for the field of neurotrauma and several laboratories around the world are asking us to build our system for them.

The third project began with a partnership with AstraZeneca, a major pharmaceutical company, to identify new molecules that regulate apolipoprotein (ApoE), which is the most important genetic risk factor for Alzheimer’s and very understudied as a drug target. Through that collaboration, we have identified several molecules that we are further exploring for their drug potential.

What are some of the genetic and environmental risk factors for Alzheimer’s?

ApoE is by far the most important genetic risk factor for typical Alzheimer’s and is a major focus of my lab. ApoE does many things, including carrying fats that are needed by the brain and regulating inflammation and vascular function, both of which can markedly affect brain function.

With respect to environmental risk factors: sedentary lifestyle, educational level, sleep, high blood pressure, high cholesterol, type II diabetes and history of TBI can all interact to affect Alzheimer’s. What is interesting is that many of these factors have a common thread on their impact on cerebral blood vessel function, especially with respect to Aβ clearance and vascular inflammation. That is why we are taking such efforts to invent a much better way to experimentally study human cerebral vessels.

Renewed interest in dementia research has paved the way for advances and discoveries in understanding Alzheimer’s. How do you think this will change the way we diagnose and treat the disease 10 years from now?

We now have much better ways to detect changes in the brain that may suggest concerns about possible Alzheimer’s far earlier than ever before.

We are also beginning to understand much more about how to better test potential treatments for Alzheimer’s that take the whole person and their life history into account. By continued investment in this research, hopefully in 10 years we will have a screening program and effective interventions for Alzheimer’s that enable our Canadian population to be screened on a regular basis and treated as early as possible.

Dr. Wellington is a Professor in the Department of Pathology and Laboratory Medicine and the Principal Investigator at ICORD and BC Children’s Hospital. She served on the Editorial Board for the Journal of Lipid Research and has published 95 peer-reviewed articles and 24 reviews. She was also the recipient of the 2016 Innovation & Translational Research Award.