A University of British Columbia-led team has uncovered a genetic signature associated with liver damage caused by a common multiple sclerosis drug.

The discovery is the first time researchers have been able to establish a genetic marker for a drug-induced harm in people with multiple sclerosis (MS), and provides another example of precision medicine — the growing capacity to tailor treatments to specific patients. The finding, published July 16 in Nature Genetics, also may provide a template for future pharmacogenomic tests.

“Risk of liver injury increases eight-fold with this marker,” said Bruce Carleton, a Professor in the Department of Pediatrics. “It’s important that we be able to understand who might be most at risk so that we can intervene with an altered treatment plan or increased monitoring to prevent liver damage.” 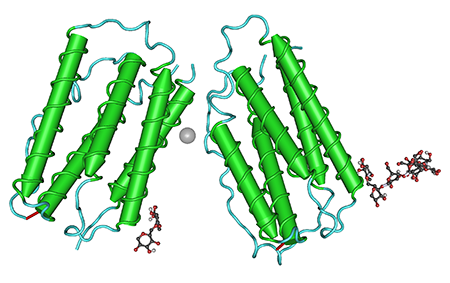 An illustration of interferon-beta. Credit: Nevit Dilmen, via Wikipedia

Liver injury is a common side effect of many drugs, but this is the first time researchers have connected a genetic marker with a biologic drug — in this case, interferon-beta — and elevated risk of liver injury. Interferon-beta, prescribed for people with the relasping-remitting form of MS, is a naturally occurring molecule that suppresses the immune reaction.

The genetic marker was identified with the help of 150 patients from five Canadian clinics and then validated in 120 patients from three sites in the U.S. and one in Sweden.

“This is the kind of research that makes drugs safer,” said co-lead author Kaarina Kowalec, who conducted the research while earning her PhD at UBC.  “We are now looking at newer MS drugs and taking a similar approach so that one day, genetic risk may factor into how we diagnose, treat and monitor people with MS in Canada and around the world.”

“We often can’t determine a person’s individual risk for a future adverse drug event very well,” said co-author Helen Tremlett, a Professor in the Division of Neurology. “That was the case for liver injury in MS, until now. We achieved this by looking for genetic markers. Many were skeptical we would find anything, but we did, and part of what we’ve done here is set out the methods for other researchers to pursue a similar line of work with the other drugs for MS.”

The research was supported by a pilot grant from the British Columbia Clinical Genomics Network. Dr Kowalec was funded as a PhD trainee from the Canadian Institutes of Health Research (CIHR) and the MS Society of Canada.