Faculty of Medicine
» Home » News » A procedure, not medication, may be a more effective first-line of treatment for common heart rhythm problem

A procedure, not medication, may be a more effective first-line of treatment for common heart rhythm problem

New research led by scientists at UBC’s faculty of medicine and Vancouver Coastal Health Research Institute (VCHRI) may have significant implications for how atrial fibrillation—a common heart problem that affects more than half a million Canadians—is treated.

Atrial fibrillation (AF) occurs when electrical signals in the right upper chamber of the heart malfunction, causing the heart to flutter or beat irregularly. The condition puts individuals at greater risk of developing stroke or heart failure. The current initial treatment for AF involves taking medication two to three times per day.

The new study, recently published in the New England Journal of Medicine, found that “cryoballoon ablation” or cryoablation—a procedure that involves using a small balloon filled with a gas coolant to freeze away faulty heart tissue—is a more effective first-line treatment for patients than medication. In fact, the procedure was better at preventing symptoms of AF from recurring at all, and reduced the amount of time some patients experienced AF. 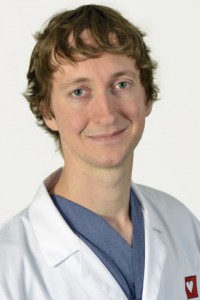 “Our research showed that cryoballoon ablation was better at preventing symptoms from recurring a little or at all, and reduced the amount of time some patients experienced atrial fibrillation,” says the study’s lead author Dr. Jason Andrade, a clinical associate professor in UBC faculty of medicine’s division of cardiology and scientist at VCHRI. “This finding demonstrates that ablation may be a more effective first-line therapy for some patients.”

The pan-Canadian study, which involved 18 health care centres and 303 participants who were treated for AF for the first time in their lives, is the largest randomized clinical trial to clearly identify better health outcomes from the use of cryoablation in comparison to medication.

Participants were on average around 58 years of age and approximately 73 per cent were male. Half of the cohort was randomly selected for cryoballoon ablation while the other half was treated with antiarrhythmic drug (AAD) therapy.

Reduced quality of life is a major factor for people with AF. Dr. Andrade’s findings show that life satisfaction was slightly higher among cryoballoon ablation patients.

“At an extreme level, some patients may become incapacitated when they go into atrial fibrillation,” says Dr. Andrade, who also serves as the director of Cardiac Electrophysiology and the Atrial Fibrillation Clinic at Vancouver General Hospital. “Others who experience more mild-to-moderate symptoms may be unable or reluctant to pursue daily activities, such as traveling or engaging in physical activity. During an episode they may have shortness of breath and feel generally unwell.”

The research is especially important due to the significant economic burden of AF in Canada. A 2012 study estimated that the Canadian health care system spends around $815 million on in-hospital AF patient care.

And while cryoablation is a more invasive procedure with its own risks, it can offer greater returns than AAD therapy by addressing the root cause of AF, rather than treating its symptoms, says Dr. Andrade.

“All participants in the study fared better after receiving either procedure. However, patients who received cryoballoon ablation were more likely to be symptom-free and not require hospitalization for their atrial fibrillation.”

Dr. Andrade says that he and his research team plan to follow up with participants in three years to gather longitudinal data on the long-term impacts of both procedures.

A version of this story was originally published on the VCHRI website.