When UBC student Shandryn Kozin travelled to Australia for a health conference and competition, winning the international event was not the priority. So when her team wasn’t announced as a finalist, Kozin wasn’t disappointed.

Then the judges realized their error.

“It was like one of those Miss Universe pageant mistakes where they said the wrong name — it was so dramatic!” she says. 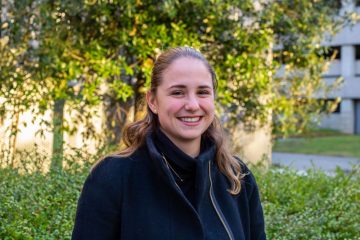 Shandryn Kozin, a first-year audiology graduate student in the Faculty of Medicine

In fact, Kozin, a first-year audiology graduate student in the Faculty of Medicine, was part of a UBC team that won first place at the 2018 International Indigenous HealthFusion Team Challenge led by the Centre for Excellence in Indigenous Health.

In December five UBC health sciences students travelled to Sydney to take part in the event for Indigenous allied health professionals, competing against groups from New Zealand, Hawaii and Australia.

Shandryn Kozin, whose heritage is from the Kinosao Sipi Cree Nation (Norway House Cree Nation), was thrilled to learn she had been selected to join the UBC delegation of students.
“I remember thinking, I know these students are going to be a really integral part of my UBC experience,” she says. “Sure enough, by the end of the flight home we had become really close friends.”

The event included a three-day conference and a three-day competition. Teams used both Western science and traditional Indigenous ways of knowledge and healing. They were given only a few minutes to present their approach to a panel of international judges for each case study.

“This competition was about breaking down walls, the importance of culture and Western medicine working together, and that it’s not black and white.”

In the final stage of the competition, the UBC team was asked to address an onset of hearing loss – the perfect test for Kozin’s expertise in audiology. “I was so overwhelmed because this is my passion,” Kozin remembers. She drew from her audiology training while presenting to the judges and the UBC team went on to win the international challenge competition.

But it was her experience working with students and professionals from diverse disciplines that was central to Kozin’s time in Australia thanks to the focus on team-based care. 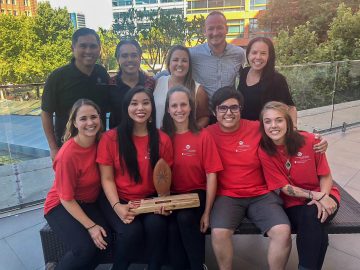 “It was really cool remembering that as allied health professionals we’re called to work together for the greater good of our cases and our clients,” she says. “The competition gave me a different perspective than being in classes with other students who are studying the exact same thing.”

The Centre for Excellence in Indigenous Health (CEIH), which operates out of the School of Population and Public Health and has a mandate to serve all health sciences programs within UBC, put together the team for this event in collaboration with the First Nations Health Authority (FNHA). The team was mentored by Drew St. Laurent, CEIH Senior Operations Manager, and FNHA representatives Joe Gallagher, CEO, Dr. Evan Adams, Chief Medical Officer, and Janene Erickson and Katie Skelton, managers, Partnerships & Projects.

LEARN MORE ABOUT THE CENTRE FOR EXCELLENCE IN INDIGENOUS HEALTH

While in Australia, Kozin had the opportunity to explore Sydney and get to know students and elders from all over the world. She learned about the possibility of successful collaboration among people with different life experiences. It also helped her solidify the practices and intentions she plans to bring to her clinical work as an audiologist, and as an active participant in the Indigenous communities she will serve.

“I’ve found that with my Western education and my cultural background there’s always been a bit of a wall,” she says. “Whereas this competition was about breaking down walls, the importance of culture and Western medicine working together, and that it’s not black and white. It was a reminder for me — this is why I want to do this. I want to help people.”